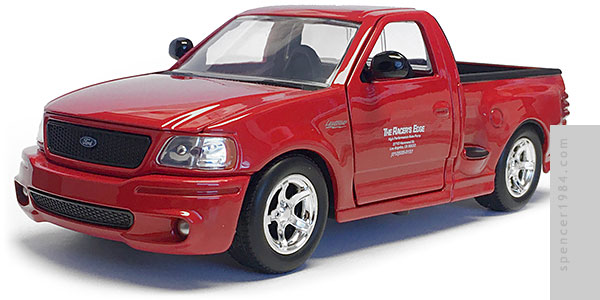 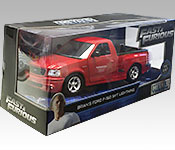 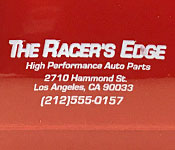 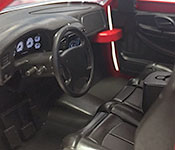 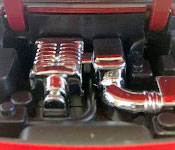 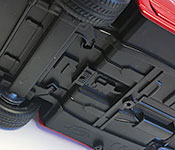 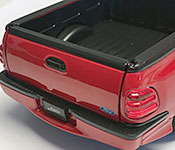 Ford's F-150 SVT Lightning was first released for the 1993 model year as a direct competitor to Chevrolet's high-performance pickup, the 454SS. While sharing most of its appearance with the standard F-150, the SVT Lightning had much better handling thanks to improvements to the chassis, suspension, and drivetrain. After a brief hiatus from 1996 to 1998 (during which time Ford launched the 10th generation F-150), the SVT Lightning was reintroduced sporting a supercharged 5.4L SOHC V8 producing 360hp. One of these factory hot rods became the delivery truck for The Racer's Edge speed shop in the first Fast and the Furious movie.

The box here is nearly identical to the one used for Dom's Road Runner. The only difference here is that the front of the box now reads "Brian's Ford F-150 SVT Lightning" under the window. A plastic tray holds the tailgate closed, and plastic bands hold the doors and hood closed.

This is a new casting for Jada, and as usual for their new molds this is some very clean work. The entire body is die cast metal, with black plastic used for the finer detail work of the grilles, cowl, sideview mirrors, bed liner, and rear bumper. The headlights are clear plastic over chrome buckets, the windshield and rear window are clear plastic, the mirror inserts are chrome, and the taillights are transparent red plastic. The bright red used for the base color is just about flawless, with even coverage and a nice high gloss finish. Trim isn't quite as good, with a fair bit of ghosting around the silver fog lamps and black side steps and bed trim. The badges help the trim score back up with some excellent printing on the Ford logos, "Lightning" badge, and "Racer's Edge" door signs.

Under the hood is a basic representation of the top of the SVT Lightning's engine. The supercharger looks about right and is in the right spot, and the snorkel is recognizable, but the engine bay is pretty shallow and many of the details are overly simplified. The chassis is also fairly shallow, but much better detailed than Jada often goes for with detailed suspension components, fuel tank, anti-sway bar, and engine details. The muffler and side pies are chrome, and the wheels are the usual vinyl tires over chrome rims with silver and red disc brakes at all four corners.

The interior is nicely done with sharp details and stickers for the instrument cluster and dash monitor. Curiously, the door panels are mounted too low on the doors. They are fit to the correct locators, and the sideview mirror housings (molded as part of the same piece) are correct, but there's a scale 3-4 inches (8-10cm) of red metal visible between the door panel and the window opening. It's the only thing that takes away from the otherwise excellent work here.

The hood, doors, and tailgate all open and close. While the hinges are very good and hold their respective panels nicely, there is an unfortunate gap at the leading edges of the doors when viewed from the inside. Also, the tailgate can be hard to get out of the "locked" position, so take care not to scratch the paint as you apply excessive force.

Aside from the overly simplified and rearranged engine, as well as the too-low door panels, this is a pretty faithful replica of the tenth-gen F-150 SVT Lightning. I don't recall seeing a dash monitor installed in the movie truck, but since most of the other cars in the film had some sort of screen it would not be surprising. Scaling is pretty good, coming in at about 1/25.

Brian's F-150 had little more than a cameo in the first movie, but it gained plenty of attention thanks to its unique combination of form and function (good luck hauling parts in the back of an RX-7). Jada as done a fine job recreating it here, right down to near-perfect scaling. Highly recommended.