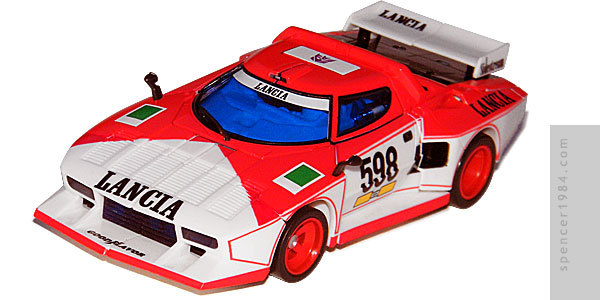 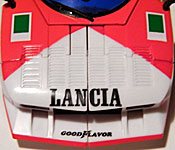 Cool Fact
In addition to his paint job and name, Exhaust has more cigarette-themed references: his function is industrial espionage, and his sponsors include "GoodFlavor" and "Sidestream."

This was a quick but critical modification to MP-23. When it was first announced, Exhaust was to be a straight update of the Diaclone "Marlboor Wheeljack," including the correct Marlboro hood chevron. Laws have changed in the last 35 years, though, and any toy that appears to endorse tobacco products is strictly forbidden (see the Tobacco Master Settlement Agreement and the Family Smoking Prevention and Tobacco Control Act). Marlboro's partent company, Phillip Morris, threatened legal action, prompting Takara to alter the decoration to make it look less accurate. Fortunately, they did this by simply omitting the paint apps on two parts. A little tape and some work with a red Sharpie fixed things nicely, though.