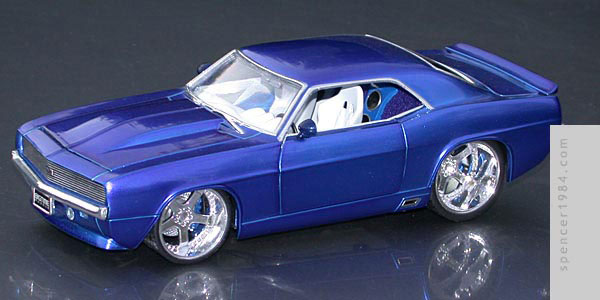 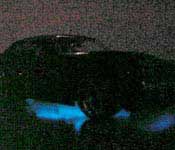 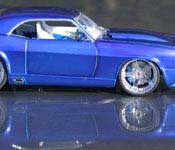 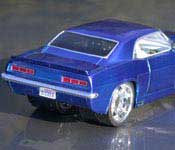 Cool Fact
"Nova," "Panther," "Chaparral," Wildcat," and "Gemini" were all considered as possible names before the official launch of the Camaro in 1967. The name "Camaro" was finally used because it had no previous connections, and was taken from an old French word meaning "friend" or "companion."
Source: The Camaro Homepage

Jada Toys has become one of my favorite diecast manufacturers. Their models are well made, the designs are cool without being weird, and the cars are relatively easy to find & buy. This Camaro was part of their "Big Time Muscle" series: modern performance takes on classic muscle and sports cars. I liked the base color they used, but thought that the black stripes took away from the look. After disassembly, my first step was to clean off the stripes and painted-on trim with non-acetone nail polish remover. Next, I gave the body a light wet sanding to remove a few rough spots, clear coated it, then gave it a good polishing to make the blue really stand out. The sideview mirrors were originally chrome, but they looked out of place, so I painted them blue to match the body. Finally, the windows were all trimmed with Bare Metal Foil.

While it was apart, I also redid the interior in white and blue. I replaced the original seats with a set from a Mitsubishi Eclipse, and used blue craft felt for the carpeting. The dashboard and speakers were detailed with Bare Metal Foil.

For the final reassembly, I raised the rear suspension a hair, and painted the underside of the chassis with GlowInc's blue glow paint. The car still sits so low that it's not really bright, but it gives it a nice subtle glow after dark.