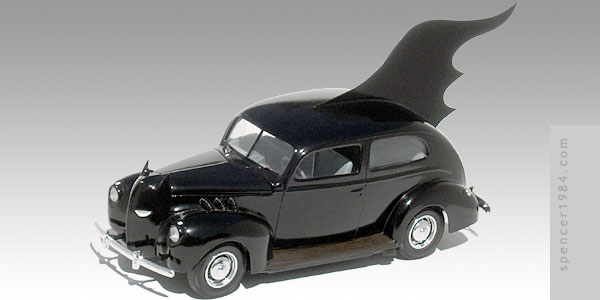 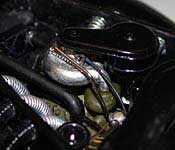 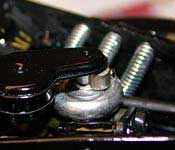 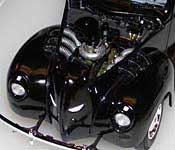 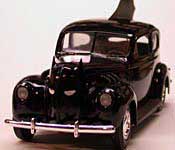 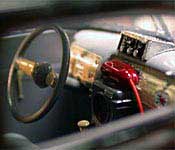 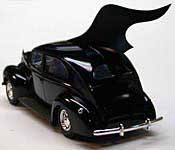 Cool Fact
The Batmobiles of the early 1940s were frequently drawn with three exhaust pipes exiting each side of the hood, but that didn't necessarily mean it was a V6. The Ford "Flathead" V8 has only three exhaust ports per cylinder bank, as the middle cylinders share a common port.

Although Bruce Wayne/Batman had a number of cars during his first two years, the first true Batmobile did not appear in comic books until 1941. The first Batmobile was typically drawn as a powerful looking 2-door sedan with a bat head grill and an enoromous fin along the centerline of the roof. Other features varied according to the particular artist drawing the car including bumpers, fender skirts, trim, and the shape of the fin, grill(s), and headlights.

The Batmobile has evolved quite a bit over the years, and I wanted to show that here by making the #1 car as close to factory stock as possible and letting subsequent cars become more radical custom projects. I started with a 1940 Ford sedan, and upgraded it with all vintage-appropriate parts.

My first step was to create the mask and fin. Since I was leaving the bumpers on the car, I decided that the mask would be more for aesthetic than structural purpose. With that in mind, I wanted to really integrate it into the front of the car, not just attach it like a shield. I cut the top section of the hood off, and glued the nose and sides of the hood to the body. The nose of the hood (with some reshaping), along with sheet styrene and a lot of filler made up the main part of the mask. Ears were cut from triangular sections of sheet styrene and molded into the mask. Once it was shaped and smoothed, I ran a strip of small half-round styrene up the middle of the mask that carried through into the hood trim.

Many of the early fins were drawn without any ribbing (as if the full-sized fin was cut from a sheet of plywood). Continuing with the "early custom" concept, I cut the fin from a single sheet of styrene and attached it to the roof. The bottom scallop ends just above the trunk lid seam, so the trunk could still be accessable.

To give the car a little extra performance kick, I used a somewhat rare aftermarket accessory. McCulloch made superchargers specifically for Ford flatheads in the late '30s and early '40s, and it seemed like the perfect compliment to the Batmobile. I scratchbuilt the supercharger out of various plastic and metal scrap pieces, based on refrence photos of the VS-57 supercharger. I made the new exhaust system by feeding small diameter springs from the engine through the sides of the hood and tops of the fenders. The pipes combine under the front fenders, and exit through side pipes under the running boards.

Inside, the car has only had minor modifications. A police radio and handset was added to the center face of the dashboard, and a smaller receiver was built to take up the hole normally occupied by the stock radio. A vintage-appropriate recorder sits on the floor behind the passengers' seat and is wired to police radio. Other details include a flocked "carpet" floor, a new floor-mounted shift lever, and more accurately sized steering wheel.

The car was finished in Krylon Gloss Black, polished but not clear coated to represent an era-appropriate paint job.