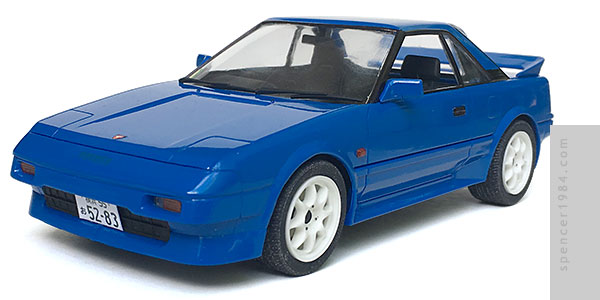 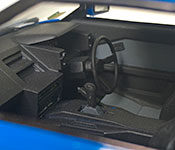 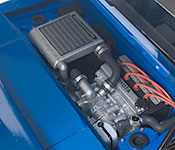 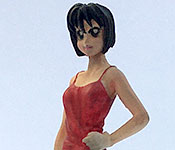 I missed getting one of these kits back when they were first released in mid-2002, and had instead picked up a later release of Fujimi's AW11 and some aftermarket wheels to make Ryoko's ride. I wanted to build Sawako's car to go with it, but I wasn't having much luck finding all the right parts...until I came across a complete original release. And right next to it was an also-complete, also-original Ryoko MR2. I had all the parts I needed already, so was it worth buying another kit just for the box art and figure? As it turns out: yes. Yes it was.

After so much work and time tracking this down, I didn't want to alter it too much from box stock (otherwise I might as well have stuck with the later kit). The biggest change I made was to cut the engine cover loose, since it was originally cast as part of the rear deck despite the fairly decent engine detail. I also opened the supercharger intake scoop and added mesh behind the opening, installed some basic engine wiring and plumbing, made new tailpipes, and added floor mats to cover the wonky floorboards. The rear drum brakes were supplied as part of the kit, but the front brakes had to be sourced from my parts box.

Paint was pretty straightforward. I started the interior with a coat of Krylon primer for the gray panels, then painted everything else flat black. The chassis and suspension was also painted flat black, with various metallic colors for the engine and exhaust. The body was shot with Tamiya TS-44 Brilliant Blue sprayed directly over the cleaned-up plastic, then trimmed with black markers and the kit-supplied decals.