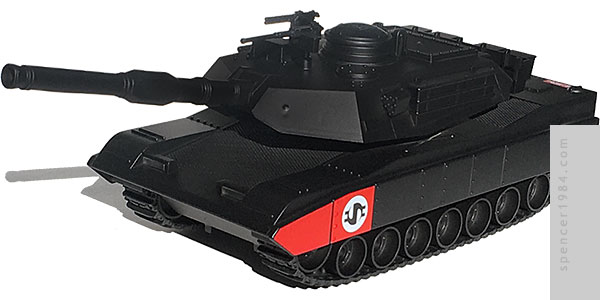 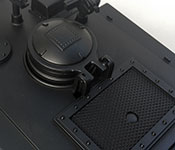 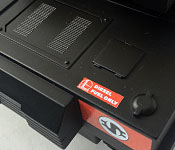 I had originally bought this to repaint as G2 Megatron, but like many other projects it got set aside while I worked on other stuff. The casting was actually pretty decent for a toy, not a perfectly proportioned M1A1 but close enough to pass the squint test. When compared to the stylized tank used in "Land of Confusion" (as drawn by Todd McFarlane), it was just about perfect.

Disassembly was easy enough, though I did need to be careful removing the road wheels since the screws holding them in place were painted in place and tended to round out easily. I also removed the screw holding the turret hatch closed, and left out the electronics (including the buttons, speaker, and barrel tip) and roller wheels. The worst parting seams and sprue attachment points were cleaned up, and I made a new engine cover to hide the holes where the buttons were located. I also plugged hole in the turret where the flag was originally mounted. The screw heads holding the road weels in place were pretty obvious, so I glued the wheels in solidly and capped them with craft dots.

Once stripped, everything was painted Duplicolor semi-gloss black. Finally, the hull markings were all custom decals I drew up and printed.