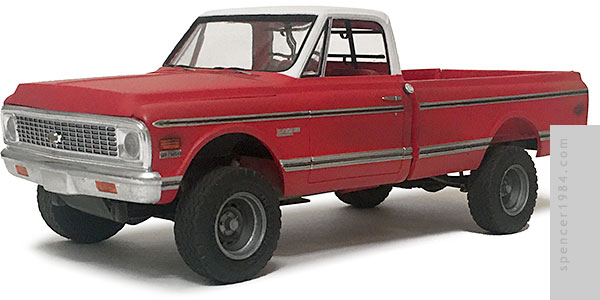 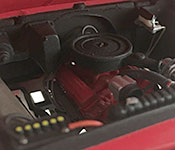 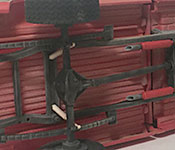 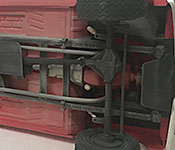 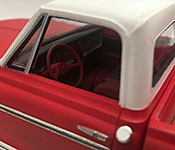 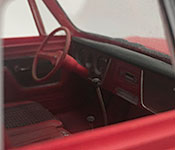 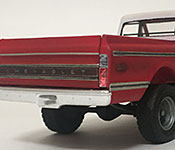 The debut novel of Rebecca Roanhorse, Trail of Lightning, follows monster hunter Maggie Hoskie as she navigates the post-apocalyptic Dinétah fully armed and driving a rebuilt '72 Chevy pickup. That pretty much ticked all the boxes needed to get my attention, and since I had a '72 Cheyenne on the shelf it was an easy "yes" of a project. The actual build wasn't quite so simple, though.

AMT's kit was the 2WD C instead of Maggie's 4x4 K, and since it was based on an old promo it had the suspension, drivetrain, and exhaust all cast as a single-piece floor. There was really no way to modify it since Chevrolet used completely different suspensions between the C and K series (A-arms & trailing arms with coil springs for the C, leaf springs all around for the K). I know some people have used the AMT "Crew Chief" '72 Blazer for the 4x4 chassis, but those have gotten pretty rare and expensive. After a little research, I discovered that Revell's '65 Chevy had a very similar chassis and almost all of its suspension bits were separate parts. It needed to be stretched to fit the Cheyenne's long box, and the front suspension cradle and bumper mounts had to be removed, but otherwise it was a passable alternative. I took the springs, axles, and transfer case from an AMT '84 GMC, which like the frame weren't exact but close enough to pass muster. The shocks, drive shafts, and skid plates were all scratch built from plastic and aluminum. The wheels were a set of resin 4x4 rallys that I got on eBay, sleeved to fit the Goodyear tires left over from my V Jeep.

Although it wasn't really wrong, the engine in the Cheyenne kit was pretty soft. I replaced this with a 350 taken from Revell's '69 Nova, which was the correct vintage, better detailed, fit he '65 Chevy engine mounts, and easily accepted the Cheyenne's valve covers and belt assembly. It got plug wires, scratch built radiator hoses, and a photoetch alternator bracket. The exhaust pipes and mufflers were also scratch built. The block was painted Tamiya TS-8 and the transmission was painted Testors Flat Steel, then everything was weathered with various paints and effects.

Inside, I added carpeting made from felt paper and scratch built the shift lever, drive selector, and steering column. There was a big sink mark in the middle of the steering wheel, so I replaced it with the wheel left over from my Stranger Things van. The base color was Testors Flat Red, with Apple Barrel acrylics used for the wood inserts. The seat patterns were done by applying custom decals over the seats, and then everything received a shot of Dullcote and was weathered using chalk and pastels.

Like the interior, the body only needed a couple of minor adjustments. The most involved was the underside of the box - without the promo-style tray, the flat, featureless plastic under the box looked woefully out of place compared to the detailed chassis. I fixed this by gluing down strips of 0.060" x 0.020" styrene, spaced to look like the inverse of the ribbed bed floor. I also drilled out the headlights and replaced them with lenses from my parts box and buckets made from hardware tacks. The body was primed with Duplicolor white, then the greenhouse was masked off and the rest of the body was sprayed with Testors Flat Red. Trim was done with BMF and paint, then the whole truck was Dullcoted and given a good weathering to fit its post-apocalyptic stamping grounds.