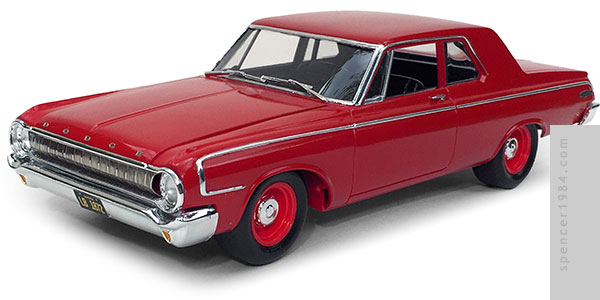 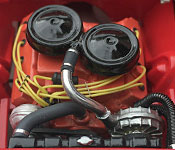 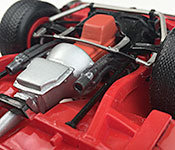 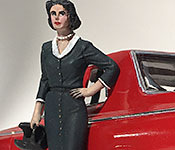 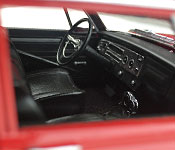 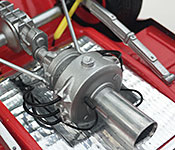 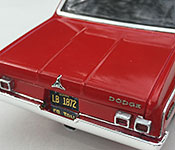 Jan & Dean's The Little Old Lady from Pasadena and its related commercials starring Kathryn Minner are part of the pop culture lexicon, and this is far from the first take on building a model of her "brand new shiny red Super Stock Dodge." But I decided to put my own spin on the lady and her car, making them truly the Terror of Colorado Boulevard.

First: the car. I've always had an affinity for sleepers, and I wanted to make this the ultimate no-holds-barred undercover street machine. Using Lindberg's Maverick 330 Super Stock was the perfect base car. The 330 was the base-trim car for 1964, not worth a second look on the street, but the Hemi-powered cars were equipped with lightweight panels and a host of other drag-ready details right from the factory. I further enhanced these by modifying the oil pan to a NASCAR-inspired deep-sump design based on measurements taken from a '64 Petty Belvedere I had on hand. I also swapped out the kit-supplied belt assembly for one from Revell's '68/9 Charger, which had an additional pulley that I could use to run the centrifugal supercharger from AMT's '57 Ford. The blower was fed via a pair of flex pipes coming through the front bulkhead just left of the radiator, which were made from crimp tubes and some fine springs. The outlet was connected to a pipe made from aluminum craft wire, which connected to a modified air box made from the stock air cleaners and a section of plastic rod. I finished off the engine with the usual ignition wiring.

Inside, I left out the back seat and modified the panelling to look like stamped metal, again using the Belvedere for inspiration. I sanded the floor smooth to indicate more sheet metal, but added floor mats up front made from craft suede. Most of the rest of the interior was built box stock - including the roll bar - but I did move the auxiliary gauges to the transmission tunnel to get them out of sight and I replaced the crude horn ring with a piece of wire. To make the racing interior less obvious, I painted everything in various shades of black and gray.

The body was also nearly box stock, though I had to replace a few small items: I no longer had the windshield, and so made a new one out of thin plastic; the kit did not include wipers so I sourced those from my parts box; I managed to drop one of the taillights and had to make a new one. The body was painted Tamiya TS-8 Italian Red and detailed with Bare Metal Foil, Molotow Liquid Chrome, and the grille, hood and trunk lettering, and rear fender badges from Model Car Garage's photo etch set. The license plates are custom made, sporting the number of the album the song originally appeared on.

So far, pretty standard stuff. The biggest changes came when I was building the chassis. First, I ditched the kit-supplied wheels for a set of Plastic Performance Products' Holman-Moody 9" wheels and tires. To keep it sort of stock looking, though, I got a set of hubcaps out of Lindberg's base 300 kit from a fellow modeler. The rear end was replaced with a quick-change racing axle out of AMT's Custom & Competition Parts Pack. After soaking the parts overnight in some Super Clean to strip off the chrome, I assembled the axle and found it fit the Dodge's rear springs perfectly with no extra modification needed. The driveshaft not so much, so I made a new one using a length of plastic tube and universal joints by FAB Resinworks. Scratch built traction bars were mounted to the rear axle and driveshaft loop.

All of this seemed pretty good, but I still wanted something more. An ace in the hole that took this from fast to monstrous. Enter the Turbonique.

I had purchased a 1/25 Turbonique from Alan Raab back when Ma's Resin was still around, but had no idea what to do with it at the time. This provided the perfect opportunity to finally put it to use, since it was a vintage-correct item that only the craziest drivers would consider. The kit was a handful of parts, combining resin, white metal, PE, and aluminum. I gave it a good cleaning and assembled the major components, then painted it Model Master Aluminum Metalizer. While that was drying, I prepped the chassis: the gas tank was Dremeled out to the surrounding frame rails, and a pocket was made to fill the hole and allow the Turbonique to sit more or less level to the floor (my theory being that fuel storage has been moved to inside the trunk). The pocket was covered in chrome Duck tape to simulate heat shielding. The Turbonique was then installed and plumbed up with fuel lines and ignition wires. I did have to flatten the outlet a little to make sure it cleared the rear bumper, otherwise it fit just about perfectly. Additional braces were made and installed between the unit and rear axle.

Lastly, the lady herself. She started out as a resin figure by Hendrix Mfg Co., chosen because she looked like an older woman without being a caricature. To have built and driven this car, I figured, she ought to have had a history in aviation. Perhaps a member of the WASPs back in WWII, where her technical expertise and devil-may-care personality translated easily to street racing back home. I cleaned up the various seams and bubbles, then replaced her right hand with a forearm and helmet from Fujimi's Garage & Tools "Drivers" set. She was painted with a combination of Apple Barrel, Vallejo, and Tamiya colors.