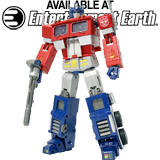 In 2003, K*B Toys announced that it would be carrying a series of Spychanger Transformers with classic G1-inspired decos. Though the concept was great, the execution was somewhat lacking. The figures on this page represent how I thought these could have been done. 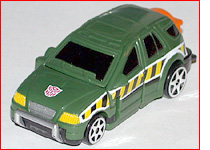 Hoist was unfortunately one of the best examples of the halfhearted sticker use on these figures. The stickers didn't even come close to matching the lines of the vehicle, and few (if any) were applied straight. This was especially unfortunate because the rest of the figure was very well done, but those stickers had to go. I made a new set of side stripes on white decal stock, made to fit the contours of the truck. 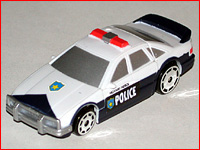 Prowl was pretty good, but apparently in an effort to avoid any confusion while in vehicle mode, the words "Police" and the badge on his hood were made ridiculously large. Nothing too fancy here, just a new set of decals more in scale with the rest of the car. 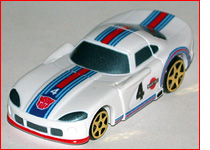 "Autobot Jazz" was badly in need of some color. Only the windows, headlights, grill, and visor were painted, and the stickers on the top and sides of the car were much too dark. The stickers also failed to run the full length of the car, leaving gaps at the base of the windshield and back of the roof. I removed all the original stickers, and made a set of decals to more faithfully reproduce the look of the original Jazz. The stripes on top of the car are now complete, and match the G1 styling much better. The "Martinii" and #4 on the doors were made bigger, and the stripe underneath them was moved down to the rocker and continued over the rear wheels. Finally, the front air dam and tail lights were painted red. 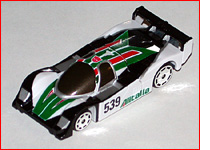 Wheeljack suffered the same fate as Hoist: whoever was creating and applying the stickers just didn't care what the outcome looked like. It was as if the designer saw a picture of Wheeljack once and...well, forgot a lot of details. The triangular hood stripes were pretty good, and the "539" was accurate, but the rest of the design was a combination of random green & red stickers and misapplied paint masks. I made a whole new set of stripes based on the original design, including new numbers and a set of "Alitalla" decals for the sides of the car. I also did some touch up on the black sections to clean up the edges and even out the two sides. 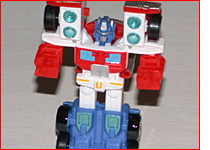 Optimus Prime was nearly perfect. Hasbro did an excellent job of redoing Scourge's paint job to look like Prime, without simply aping the Laser Prime color scheme. The only problem here was the fact that the set of rear wheels molded into Prime's legs were blue (Scourge, being moded in black, didn't have to worry about this). A simple touch-up with some black paint took care of this. I also repainted his chest windows to a more traditonal blue.