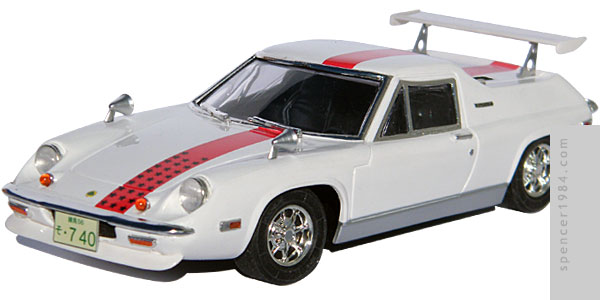 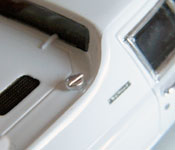 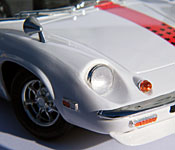 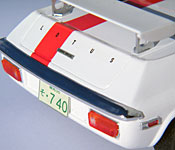 This was an old kit by Doyusha, and one that had been in my "to build" pile for a few years. I had been trying to get all four kits in the Circuit no Ōkami series before I started work on them, but then Fujimi announced plans to offer all-new kits based on the manga and my plans for doing a group build became even sillier than it originally was. Then the second wave of Fujimi kits was announced and scheduled to include Yuya Fubuki's Lotus Europa, so I figured it was time to get it done.

The kit is typical of Japanese kits from the time: electric motor driving the rear axle, stout but effective posable front wheels, shallow interior with minimal detailing. I generally never use the motors that came in these kits, but I made an exception this time just to see if it actually went together as easily as they suggest (it does) and it the final result was worth it (sort of). There was a bit of a problem getting the body on over the batteries, but otherwise everything fit together perfectly and I do have to admit that it's kind of cool seeing it work once everything was assembled. I made no effort to correct the interior, which thanks to the relatively small windows and black color wasn't quite as glaringly obvious as I had originally feared.

The body was pre-painted white with the red stripe, black stars, and silver rockers. It was a little rough in spots—some orange peel on the doors and gaps in the red stripe—but nothing I couldn't work with. I touched up the red stripe and polished out some of the rough spots, which provided a pretty decent finish. I then drilled out the headlights and parking lights to give them a little more realism, painted the spoilers Tamiya Pure White to match the body, painted the grilles and wheel inserts flat black, and painted the mirrors and wing supports Model Master Aluminum. The rest of the trim was done with BMF and the kit-supplied decals.