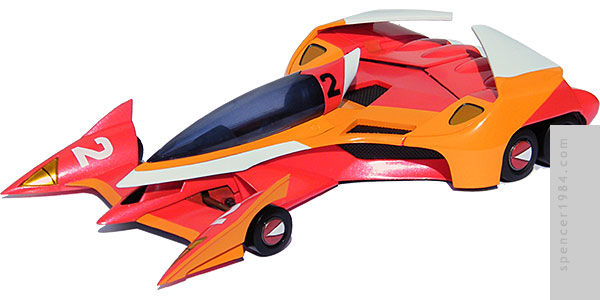 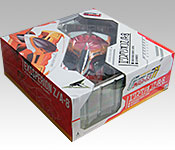 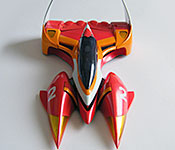 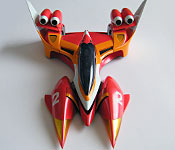 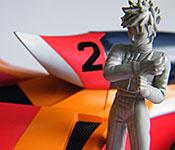 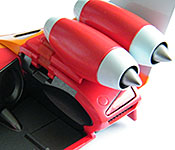 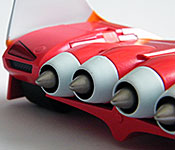 In the far-off future of 2015, artificially intelligent computers called "Cyber Systems" have been installed in Formula racers to help improve racers' abilities and reduce accidents on the track. Naoki Shinjyo is a highly successful F3 Champion who makes the switch to Cyber Formula. After two seasons coming in second place overall, Shinjyo is finally crowned World Champion of the 2017 season in the #2 Experion Z/A-8, the latest machine from team Aoi.

The package is a square cardboard box, approximately 10¾" (27cm) on a side and 4" (10cm) deep. The window is an irregular diagonal slash across the top and opposing end panels, with a large portrait of the Experion and its logo on one side of the window and the name, stats, and "Variable Action" logo on the other. The text and photos are oriented in such a way that there is no "front." One of the side panels with the window continues the portrait of the car and repeats the Aoi logo and stats, while the other one has the series' logo, stats, and Mega House/Sunrise logos. These panels are all printed in white, while the other two side panels are red and gold to reflect the Experion's primary colors. Both have line art and full detail drawings of the car under its name (Spelled "Exssperion") and stats. The bottom has multiple photographs of the model along with detailed views and descriptions of its features. It also has all of the legal and contact info. Inside, the car is sandwiched between two clear plastic trays and a printed background that mimics the corner of a road course, with painted edges and grass off either side of the track. The trays are taped together, but nest so securely that the car and accessories can be repackaged easily. The Experion is placed in the tray on a gray display base that includes the car name, driver, and number printed in white. Four alternate wings are packed in four indents surrounding the main car, Shinjyo and his base are in two smaller indentations, and the alternate front end is bagged and taped to the underside of the bottom tray. The base and car are keyed to each other, but not fastened together. I really like the consistent design Mega House has established for their Cyber Formula cars: each one is unique, but by using the same size and same basic layout you get a real sense that this is a series.

As has become typical for the series, the Experion is expertly cast, with sharply defined edges and tight assembly work despite the myriad (and often ludicrous) curves that make up the body. Due to the extreme transformation the Experion is capable of, several components are made to be swapped out. Even these fit so tightly that their edges appear no more substantial than the difference between a door and a fender on a typical model kit. Only two errors hold it back from a perfect score: a longitudinal seam along the cockpit dome behind the canopy, and the rear engine flaps that don't *quite* close all the way. There are also some seams around the front axle, and while they are in reality a part of the casting and conversion they are located and arranged in a way that makes sense as a functional race car. In addition to the opaque plastic used for most of the body, the canopy is cast in transparent clear blue and the forward and waist lights are either translucent amber over silver, or transparent clear over gold. Similarly, the taillights are either clear red over silver of clear over metallic red. Either way, the effect is quite nice. The chassis is metal.

The Experion sports a paint scheme very similar to the Fire Superion. The main body is red with an orange swoosh, black vents and intakes, a white spoiler and numbers ("2" instead of "5"), dark gray chassis, and steel exhaust tips. The colors area little brighter than they were on the Fire Superion, and there is less black and more white, but you can clearly see the lineage. The 2/4 arrangement of wheels helps sell the history as well, since most of the cars in the Cyber Formula universe have either a 4/2 arrangement or a traditional four wheels. Unlike the Fire Superion, though, the Experion has a single-seat cockpit painted dark gray with a black steering wheel and black and silver belts.

A matte black base with sharp white lettering and beveled edges is included, and like the car the printing is sharp and has no problem with opacity. It is packaged in what is dubbed "Technical Circuit Mode," which leaves all six wheels exposed. Replacing the front axle/forward intakes (three pieces total) with the included narrow-track nose and replacing the rear wings/fenders will convert the Experion to "Icarus Wing Mode." While the wheels are fully enclosed in this mode, you still have one additional option: the first set of fenders keeps the wings curled over the main fuselage, while the second set has them extended out further and allows you to open the rear engines. With the enclosed sides and exaggerated wings, the Experion looks less like a road racer and more like something from the F-Zero universe. The replacement parts all swap out easily, and are sculpted and painted to fit beautifully with the main car. An unpainted figure of Naoki Shinjyo is also included, this time helmetless and adjusting his driving gloves (an earlier Shinjyo was included in the Stealth Jaguar).

As with the rest of the series, this is a very good representation of the anime car brought to life.

Another solid entry in Mega House's Cyber Formula series. Not only is it a great replica on its own, it serves as a nice indicator of the evolution of these cars by incorporating the paint scheme of the Fire Superion with certain design elements of another one of team Aoi's prominent racers, the Stealth Jaguar (check out the nose, fenders, or jet engine shapes). It's a subtle but excellent way of helping to sell the series as a cohesive universe, and Mega House managed to capture it perfectly. Highly recommended.