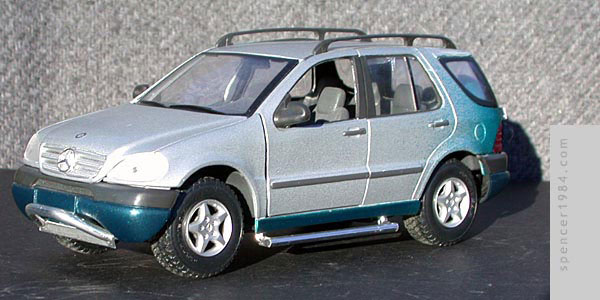 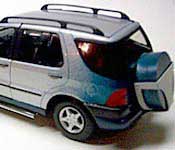 After years of Transformers turning into flying squirrels, monkeys, and earwigs, Takara/Hasbro finally went back to the old school of cars that turn into robots. It's not that I dislike Beast Wars/Beast Machines, but I've always preferred the car/robot theme. Like the original series, Robots in Disguise (RiD) came in regular sized vehicles (about 1/38 scale for the 1980s series, a bit bigger for the RiD line) and minicars (about 1/64 scale). Like my other TF models, I will be building only the regular vehicles for the most part. X-Brawn is the first model from the RiD line that I have completed.

Starting with Maisto's ML320, I disassembled the SUV, removed the Mercedes-Benz logo from the rear doors, and cut off the trailer hitch. The model was already painted silver, so I created the silver/teal fade by simply spraying CheZoom Teal from almost directly behind the car without using a mask. I also used CheZoom Teal to paint the rocker panels, bumpers, and scratchbuilt spare tire cover. In addition to the spare tire cover, the front grill guard, side rails, and tire carrier were all scratchbuilt from sheet styrene and parts-bin plastic pieces. I downplayed the off-road accessories on this model and made it look a little more street-friendly intentionally, because I wanted to have it look different from the "power-up" version of X-Brawn.