The Fast and the Furious 1969 Yenko Camaro 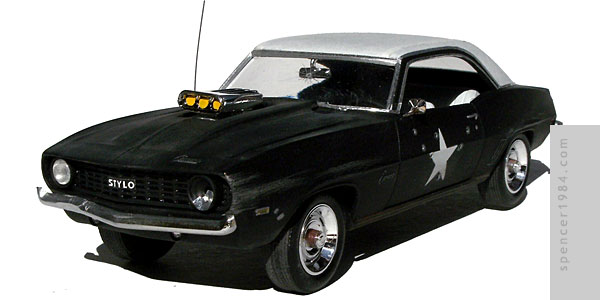 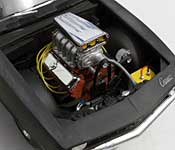 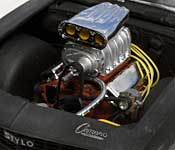 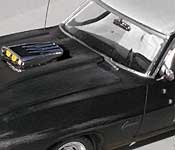 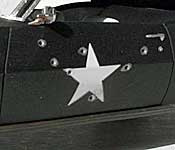 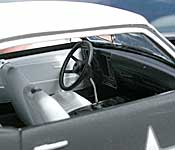 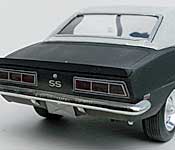 Cool Fact
A scale model of the "Stylo Camaro" was to be produced as an exclusive to Gorillaz fan club members, but was canceled and members instead received unique lithographs.

I had bought this kit when it hit stores, fully intending to build it as the Camaro used in 2 Fast, 2 Furious. But complaints about its quality were well-founded: lots of flash, sink marks in several places, and incomplete chrome plating marred what would otherwise have been a mediocre kit. Fortunately, after seeing the music video for "Stylo," I had another use for a '69 Camaro...one that even benefitted from the rough casting.

Some parts of the build required very little work. The chassis was built box stock with wheels and tires from Revell's '69 Baldwin Motion Camaro. The interior was also pretty straightforward: the headrests were left off the front seats, the shift lever was scratchbuilt, and a parts box steering wheel replaced the kit-supplied piece.

The engine received a supercharger from Revell's '79 Camaro Z/28, a parts box radiator, and basic wiring and plumbing. Weathering was geared towards this being a well-built but badly abused car, so things like the braided hoses and Optima battery were offset by a leaky radiator (also evidenced by the steam coming from under the hood at the beginning of the video).

The body required the most attention. First, I marked where the bullet holes should be located on the driver's door, and drilled the appropriate holes. I then removed a few of the sink marks, but left the ones near the left front corner since they matched the damage shown in the video. I added a few more dents, and scuffed up the fenders where the paint was to be scraped. A light sanding removed the mold parting lines, and it was ready for paint.

Testor's Flat Black was used for the base color, and detailed with silver paint, a silver colored pencil, and metal tape for trim. Star decals came from a Hasegawa Jeep, and wear marks around the various scuffs and bullet holes were created with the silver colored pencil. The vinyl top was made out of masking tape, lightly distressed, and painted Polly-S Reefer White. The SS badge between the tail lights was left over from the Model Car Garage Photoetch set I used on the Supernatural Impala. The front bumper was bent and flattened, then finished with BMF and Stainless Steel Metalizer.

As with the Thunderbolt & Lightfoot Firebird, there was no license plate on this car. So once again I made the stamped plate bracket out of aluminum foil. I also used aluminum foil for the remnants of the shattered headlight. Mirrors from Revell's '69 Baldwin Motion Camaro, a guitar wire antenna, and the "Stylo" grille emblem finished it off.