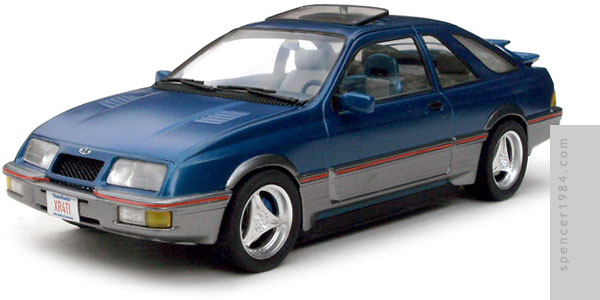 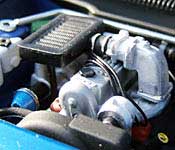 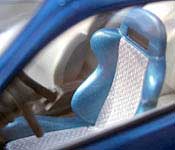 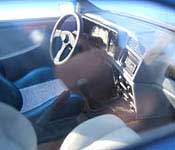 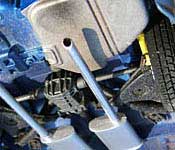 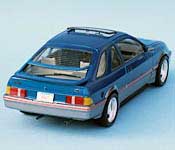 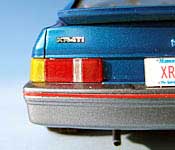 Misfile isn't really a web comic as much as a web comic book: instead of daily gags, there have been a few story arcs all building on one another. It follows the story of Ash and Emily, two people who are the unforunate victims of a celestial filing error caused by a pot-smoking angel. It's well-written and well-drawn, though what first caught my attention was that it was also a "car comic." Ash is the main gearhead, driving a modified Merkur XR4Ti.

Tamiya's Ford Sierra was the starting point for this model. As with most comic-based cars, the exact details would often vary from panel to panel, allowing some freedom during the build. One of the things that didn't change, though, is the engine: Ash's XR4Ti is listed as a 2.3L SOHC 4 cylinder, while the Sierra kit came with a V6. To fix this, I used the engine out of Revell's '87 Thunderbird, which had the added bonuses of a turbocharger and an intercooler right out of the box. It fit in pretty well: the only major modifications I needed to make were to the engine and transmission mounts. I also added wiring and plumbing, a scratchbuilt power steering pump (neither kit bothered to supply one), a sway bar, and a scratchbuilt cone filter.

The chassis required relativly little work: other than the exhaust system, everyhing was built with the stock Sierra parts. The exhaust system from the engine to the mufflers was taken from the Thunderbird, and the tailpipes were made from aluminum tubing. Because the car is a regular driver and weekend racer, I weathered everything to simulate road dust.

Inside, I only made minor changes. The seat is the final "oddity." Throughout the course of the comic, it has appeared as both a custom racing seat and the stock seat. There are few color pictures of the car, but one of those clearly showed a blue seat - so I went with that and used the racing seat out of a Skyline kit. Ash also modified the steering wheel and pedals, and I made sure to include both here. The steering wheel is out of a Viper, mounted to a standoff from an Eclipse tuner, while the pedals were scratchbuilt. I also filled in the back of the passenger's seat (it was hollow out of the box), and added felt carpeting. Like everything else, I tried to make it look like a used but well-maintained 20-year-old car by adding a little wear here & there.

The body needed relatively little work. I opened the grille to match Ash's custom Sierra Cosworth nose, and added vents to the hood. The hood vents have a tendency to move around in the comic, but they're usually shown as two vents just aft of the halfway point. I made these by cutting twin holes in the hood, then filling them in with sections of styrene siding. Rather than making them true Cosworth vents, I made them look like more generic aftermarket vents to match the comic and the overall theme of the car. I decided to keep the sunroof, which appears occasionally in the comic (though not every time). Once the body mods were done, I painted it to match Ash's car with Tamiya paints. Written descriptions of the car mention ground effects, but the Merkur's rockers are usually drawn stock. I decided to split the difference: I added side skirts, but painted them black so that they would disappear somewhat. Other details include custom badges, a mesh grille, pinstriping, and a set of Aoshima Volk Racing Formula S wheels to replicate the three-spoke wheels shown in the comic. A pair of Massachusetts "XR4TI" license plates finished the look.