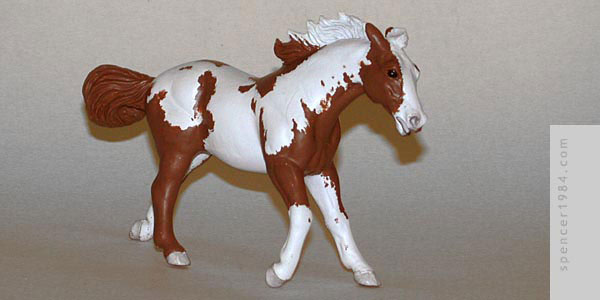 Cool Fact
Viggo Mortensen enjoyed working with his co-star TJ so much, that he bought the horse after filming wrapped.

Regardless of the "true" nature of Hidalgo, I still found the movie to be quite entertaining. When I saw this figure at a local craft store, I knew it would make a great companion piece to the rest of my 1/24 movie collection (even if it's not a "vehicle" in the traditional sense).

I covered the original paint job and created a good starting point for Hidalgo's pattern with a layer of flat white. I then mixed up a custom brown to match the movie horse's color, and painted it based on several scenes taken from the movie. Because several horses were used to make Hidalgo, the exact markings would often change from one scene to another. The final pattern is kind of a best fit, based as much on the actual film horses as possible.

Once the markings were painted, the hooves & face were detailed and the whole figure was sealed with Dullcote. All in all, it was a fun project and a nice departure from my usual model building.