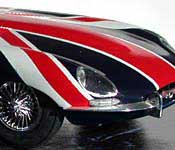 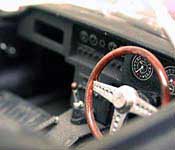 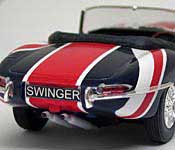 Have you ever had one of those model kits that just didn't want to be built? Gunze-Sangyo did a pretty good job with the basic kit, and I am pretty happy with the end result, but the process between the two was something I thankfully don't have to do too often.

I bought this kit several months before Revell announced that it would be releasing both Austin's Shaguar and Felicity's Corvette, and it was the only 1/24 Jaguar roadster available at the time. The kit had some very nice features, such as the fine detail in the wire wheels and the optional removable hard top. One interesting thing about the kit is that the interior bucket is almost all black vinyl. It gives the seats, door panels, and top boot added realism, but unfortunately the parts are prone to warping and it is much more difficult to glue door hardware onto slick vinyl. Also, the car had the steering wheel on the left, which is surprising considering it is a Japanese model of an English automobile (both countries drive on the left). That part was easy enough to correct; the Jaguar has a nearly symmetrical dashboard, and it was only a matter of filling in the hole on one side and cutting it out of the other.

The steering wheel change ended up being a simple job, and the interior, while frustrating at times, still wasn't too bad. The biggest problem with assembling this model was the paint. I ended up putting on and stripping off at least three coats of paint before I got a base coat that wasn't cracking, peeling, or wrinkling. Given the shape of the car, the stripes had their own sets of problems, including the hood vents, fuel door, and proper spacing of the straight stripes of the British flag on an ovoid body. In the end I used a lot of 1/8" chart tape, a lot of touch-up paint, and a few applications of polishing compound to get the body smoothed out.

I would still recommend this kit as a good representation of the '67 Jaguar XKE, but with a few reservations: be patient with the interior, it really will fit together with some encouragement; save the front and rear suspensions for last, or you will lose some very helpful handholds; forget about the headlight bezel decals, they just don't fit; the parts in this kit are very fragile - I broke a tail light, two wipers, the steering column, and the shift lever before I got them off the sprue; and finally, try to paint the car a solid color - the stripes sometimes seemed more trouble than they were worth.