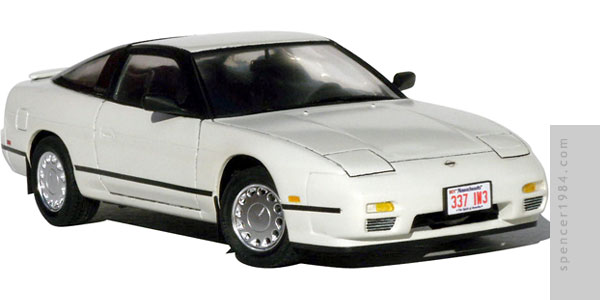 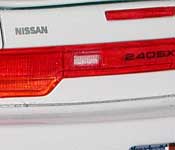 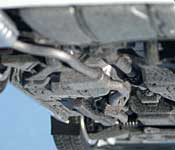 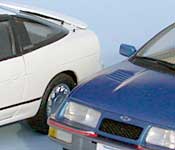 The third car in my Misfile model series is Emily's 240SX. It's probably the car that's been through the most changes since it was introduced in the comic, including an automatic-to-manual transmission swap and the addition of a turbocharger. I decided to build it as it was equipped in the beginning, in part because Fujimi's 180SX had an automatic out of the box.

Since I was building a stock (if used) car, I had to make very few modifications. Fujimi included parts to build the Nissan as either left- or right-hand drive, as well as stock exhaust parts, seats, and rear spoiler (the kit was billed as a performance car, so these stock parts weren't advertised). The wheels were wrong, but I was able to get a correct set from Tamiya's 180SX. Tamiya's kit also provided the 240SX markings and Nissan logo for the rear hatch. Other modifications included filling in the seat backs, new metal pins for the front axles, a new antenna, and aluminum tail pipe, and mud flaps. The chassis was built stock and well weathered to look like a car that had been used as a daily driver for most of its life.

The paint is Rustoleum Gloss white with satin black for the trim. The panel lines were pretty shallow on this kit, so I added a wash to help define them better. I had to make up my own license plates, since they were never shown in the comic. I doubted Emily would go for vanity plates, but I still wanted to give the car something special. So I made a set of generic-looking "337 IW3" plates...if read upside-down, the result is "EMI LEE."