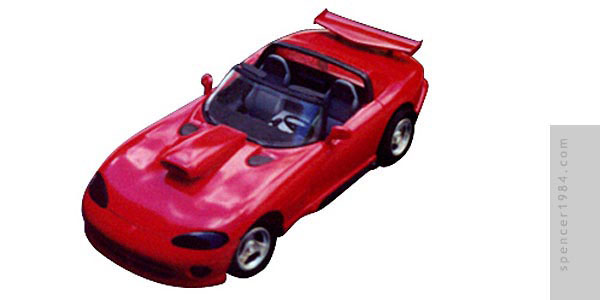 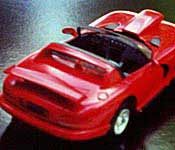 Not really based on anything but a new-era hot rod, I built the kit years ago from one of AMT's first releases of the Viper.

Originally, the engine was sticking through a hole in the hood, and there was no rear spoiler. It did not look right to me, though; I thought that the engine looked too crude for the smooth lines of the car. So, I removed the high-rise manifold, and replaced it with a highly modified supercharger. The hood scoop was taken from AMT's 1966 Nova Pro Street, and needed very little work to be grafted to the Viper hood. The hood scoop looked a lot better than the chrome air cleaners, but unfortunately it made the car too nose heavy; I needed something on the trunk to visually balance the hood. For this, I added the rear wing from a 1/32 Lamborghini Countach. The last thing I added was a rear window for one of the "Viper" decals provided in the kit.

The paint scheme is just what was suggested in the instructions: Gloss Red with orange accents and a gray & black interior.