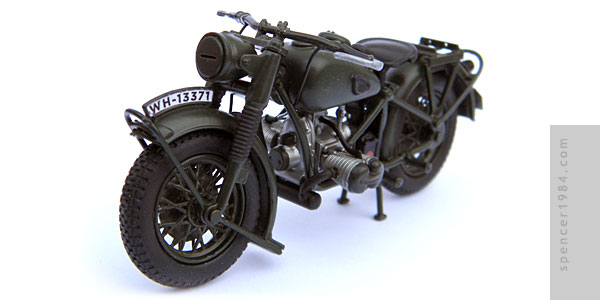 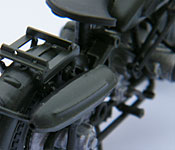 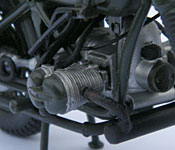 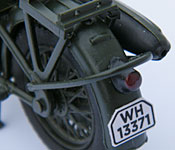 Cool Fact
Steve McQueen said about the motorcycle he rode in The Great Escape: "We had four bikes for this film. I was running a TT Special 650 Triumph. We painted it olive drab and put on a luggage rack and an old seat to make it look like a wartime BMW. We couldn't use a real BMW, not at the speeds we were running, since those old babies were rigid-frame jobs, and couldn't take the punishment."
Source: Steve McQueen Online

In another case of an "implied" rather than "literal" model, I decided to go with something a little more historically accurate for The Great Escape than a British motorcycle from 20 years in the future. Not that this is truly correct: as far as I know, no R75's were ever operated without their sidecars except in the possible event of maintenance/repair. Maybe that's why Virgil Hilts couldn't make it over that second run of barbed wire...the out-of-balance R75 just couldn't handle multiple jumps like that.

I started by removing the sidecar and disassembling the major components of the bike. I then repainted everything but the engine TS-2 Dark Green, which (accoring to a friend who builds WWII armor) a pretty close match to the dark green used by Germany. Some extra paint sprayed into a bottle cap was used to do touch-up work around the smaller components that couldn't be sprayed directly.

Once the paint was done, I reassembled everything but left off the rear seat. To make it look more like the movie bike, I scratch built a frame to make it look like the seat had been removed (perhaps part of the repair that necessitated the removal of the sidecar?). A few minor paint touch-ups, a light weathering, and a set of screen-accurate license plates finished off my version of one of Steve McQueen's most famous rides.