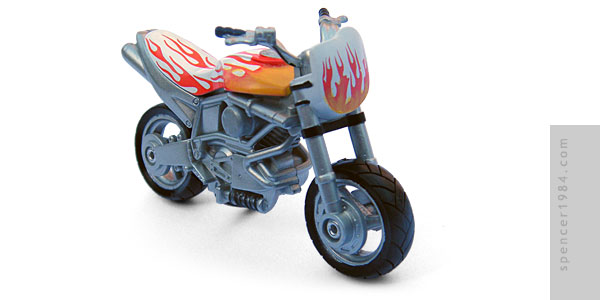 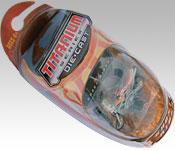 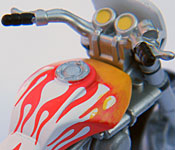 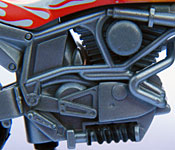 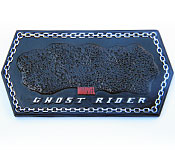 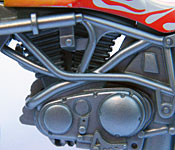 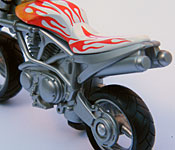 Before he becomes the titular character in 2007's Ghost Rider, Johnny Blaze is a famous stunt rider in the vein of Evel Knievel. His stunts grow increasingly dangerous, reaching their pinnacle when he makes a goalpost-to-goalpost jump across a football field, clearing the spinning rotors of several Blackhawk helicopters. The bike he uses for this stunt is a custom Buell X1 Lightning, which he then uses to exit the stadium and pursue his former girlfriend. Hasbro released a replica of this bike—along with a Ghost Rider figure, Ghost Rider with his bike, and Grace (Blaze's personal chopper)—under their Titanium Series Micro Figures banner.

Hasbro's smaller Titanium figures are packed in an oblong blister card. The front and sides of the bubble are domed, and the edges of the cardback are curved to match. With only the cardback and bottom of the bubble being flat, it is difficult to store and nearly impossible to stack these packages. It is also very difficult to get into without destroying either the card or the bubble. As long as you have a place to hang/set it, though, the sealed package displays very nicely. A cardboard insert set along the bottom front of the bubble has the Ghost Rider logo along with "Johnny Blaze's Stunt Bike,", "Die Cast Metal," and "Includes Display Stand." "Titanium Series Die-Cast" is logoized at the top of the bubble. A version of the stunt bike's flame deco starts underneath the "Titanium..." printing and continues down both sides, forming a frame around the edge of the bubble. The cardback has a simple gray line effect behind the bubble, a hook for store display at the top, and a Ghost Rider drawing/logo with the stunt bike's specs, a brief writeup about the bike, logos for Marvel, Micro Machines, Galoob, Hasbro, and Columbia Pictures, and the legal info on the back. The bike and display stand are snapped into a plastic tray, captured between it and the bubble. Despite not being collector friendly, it does a good job of showing off the contents. Also, since the packaging is mostly plastic, it is almost impossible to accidentally harm it or its contents.

Considering that this was originally sold at a $5 price point, it is surprisingly well done. There are a few crude details, like the riveted axles, the heavy triple tree, and the solid mufflers. But these are more than made up for by the clean treads on the tires, the well-detailed engine, and the intricate frame. The fork tubes are also a little heavy, but not so much that they ruin the bike (Grace, by comparison, looks like it's front fork was made from old culverts). The paint work looks great, with smooth, consistent finishes on the white and silver areas, clean edges along the black hand grips and braces, and a very nice gradient on the sharply painted flame decos.

The bike has spinning wheels and a moveable kick stand that can be pivoted to lean the bike either way. It also comes with a display stand. This is a hexagon cast in black plastic, with smooth edges and a stone/cinder texture towards the center. There is a cast-in Marvel logo painted red, and a cast-in Ghost Rider logo and chain link frame painted silver, The bike sits on it with no problem, but it doesn't really add much. Better to just park the bike next to your other TV/movie cars if you plan to take it out of the package.

Overall this is a pretty faithful (if simplified) representation of Johnny's stunt bike. The engine, frame, and seat look just about perfect. The gas tank, suspension, handlebars, triple tree, and exhausts suffer a bit more from the simplification, but are still decent. Finally, both wheels are the same size here, while the 1:1 bike's front wheel was narrower and had a larger diameter. The silver painted components should actually be chrome plated, but given the size of the bike and the inherent issues with plating small parts, I'll give Hasbro a pass for the omission. The Titanium Series was marketed as toys/collectibles rather than scale replicas, so no scale is stated. But going by the stock Buell X1 wheelbase of 1410mm (55.5 inches), this scales out to be around 1/27.

This is a very good replica of the "not as famous" bike from Ghost Rider, leaning towards "great" when you consider the original price of it. It's too bad Grace and Ghost Rider's bike were not as well done or to scale with this, because the three of them would make a great set. As it is, if you want the most iconic bike go for the Ghost Rider version...but if you want the best one go with this.