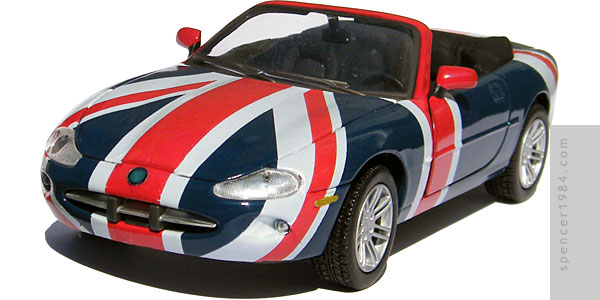 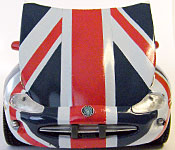 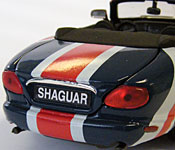 Shown in the movie-within-a-movie introduction to Austin Powers 3: Goldmember, this was the first "spy car" to appear in the series that featured more than a unique paint job (sorry, time machines don't count as spy cars). Among other things, the rear bulletproof screen and remote call features marked this as a truly Bond-inspired machine.

This was a pretty simple repaint of Maisto's 1/24 XK8. Because the lines of the XK8 are much cleaner than those of the XK-E, I was able to recreate the Union Jack paint job using custom made decals over a solid coat of Blue Angel Blue. The car's interior was painted black and detailed to match the Austin Powers car, and it received BMF and custom-made license plates.

I made one last correction several years after this was "finished." When I first worked on it in 2002, there was no source for the correct wheels and I left them as the original first-gen XK8 style. Then I made the Misfile XKR in late 2009, and found myself with a spare set of wheels that could be used on the Shaguar. It took a little longer before I finally got all the pieces together, but at last I made some adapters from styrene tubing and could finally call the Austinpussy Jaguar properly done.