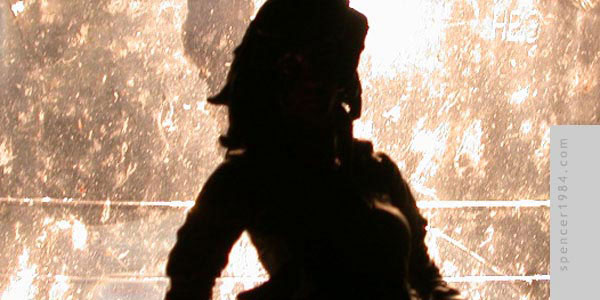 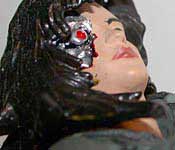 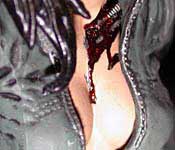 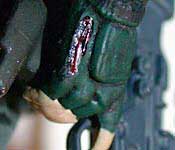 I had been considering making a terminatrix figure for some time, but the details of how to do it didn't come to me until McFarlane Toys released their Movie Maniacs T-800 and T-1000 figures. Sniper Wolf from the original Metal Gear figure series seemed like a good candidate for customizing; her dress, stance, and expression were perfect for the emotionless machines.

I started by disassembling everything except for the figure's inner torso. The face was modified by outlining the final shape of the scar, then slowly carving the vinyl into the shape of a skull. The shoulder, hand, and knee were done using a similar (though less involved) method. I scratchbuilt most of the endoskeleton details based on the standard T-800 model 101 Terminator, but I made them smaller and smoother to reflect the different model designs (the "T-800 model 235" is my own designation based on the original Terminator hierarchy, not the recent Terminator 3 character).

In addition to the battle damage, I repainted the figure's hair and added some more weathering using an ink wash, chalk, charcoal, and drybrushed paint.