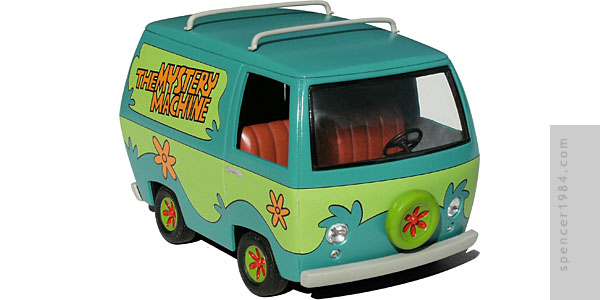 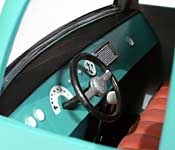 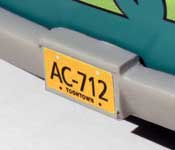 Cool Fact
According to Ronn Webb at WingnutToons.com Animation Reference Site, the Mystery Machine's license plate (AC-712) only showed up once in the history of Scooby Doo, in a 1979 Scooby/Scrappy episode "The Neon Phantom of the Roller Disco"

As I have noted elsewhere, I will occasionally revisit a kit if my first build was unsatisfactory. One of the kits near the top of that list was the Mystery Machine: my first version of it was OK, but I knew I could do better.

My biggest problem with it was the green areas: the original Polar Lights stickers were not quite accurate, and suffered from being printed on thick, inflexible paper with fragile ink that wore off easily. My own custom paint was a good match color-wise, but was thicker than I wanted. Unrelated to these problems, my color choices inside the body were too dark, and I wanted to fix that as well. Finally, the time came when I pulled the finished model off the shelf to give it a full rebuild.

First, the kit was almost completely disassembled. The chassis/wheels/tires assembly had already been upgraded during my first build (kudos once again to whoever at Polar Lights made sure that the Mystery Machine could use standard 1/24 scale parts), so I left that alone. Everything else was broken down to the individual parts, and the body, dash pad, roof rails, and bumpers were sanded down to raw plastic.

I was still happy with how the front seat turned out, and didn't want to lose that during this rebuild. So I masked it off before repainting the cargo floor. I also masked off the dash face so that I could paint just the pad. Krylon has discontinued the Teal that I used the first time, but fortunately I still had plenty to repaint the body. Once the teal was dry, the inside of the van was painted a medium gray.

I worked with the folks at Reprolabels to create a better, more accurate set of markings for the van. It took a few tries, but eventually we were able to arrive at a good set that should also work for other customs (should someone want to build a Pinewood Derby Mystery Machine or convert a Ford/Dodge/VW diecast van into a Mystery Machine). They're printed on stock with a little give to it, and the ink is pretty indestructible, so they do a good job adhering to the bulbous van body. The set was also designed to have as few breaks as possible: a single cut at each corner with an X-Acto or a pair of scissors is all that is required.

Now that the interior and body were done, the only thing left was the trim. First, I reshaped the rear bumper bracket to accept a proper 1/24 scale license plate. Then it was time for paint. Bright chrome seemed a little out of place on what was supposed to be a kids' van - most "cheap" trucks and vans at the time had painted bumpers, mirror housings, etc. - so I was going to go with a light color for these parts instead. I painted the bumpers and roof rack Flat Gull Gray as a primer, but ended up liking the look so much that I stopped there. The components were then reassembled, and I had a much better looking Mystery Machine in my collection.