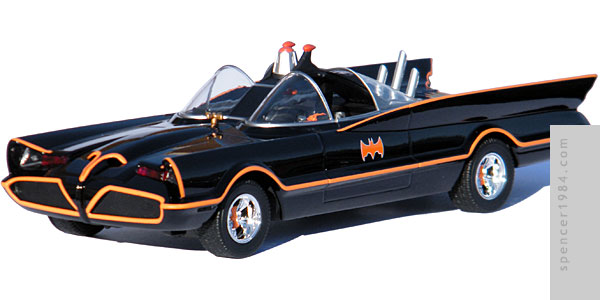 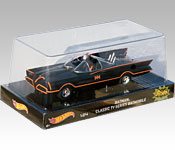 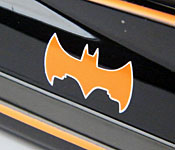 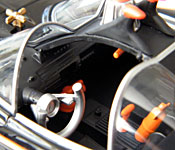 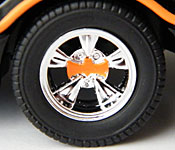 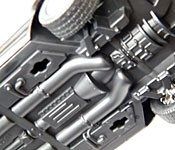 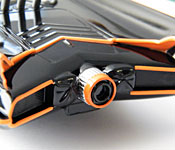 In the late summer of 1965, an all-new Batman TV series was gearing up and Dean Jeffries was hired to build a Batmobile for the show. But when the show's production schedule was moved up, Jeffries had to pass on the job and the task of building the Batmobile went to Barris Kustom City. With merely three weeks to build the car, George Barris decided to use the Ford Motor Company's abandoned Futura concept car as a basis for what would go on to become one of the most famous cars in the world.

Hot Wheels' Heritage series of Batmobiles comes in a "fishbowl" style package measuring 10½" (27cm) x 5½" (14cm) x 4¾" (12cm). The top 3½" (8.5cm) is slightly narrower than the base, with tapered sides, a flat top with a slightly raised rim, and rounded vertical corners. The plastic that makes up this dome bulges out around and underneath the tray, with a flap that folds underneath to completely surround the car and its base. The base is made out of hefty cardboard, entirely black except for the Hot Wheels Logos (all four sides), the scale, "Batman Classic TV Series Batmobile," and TV show's logo (long sides only), and "Made in China" in several languages (one short end only). The legal information, bar code, contact information, and additional licensed logos are all printed on the bottom of the base. To access the car, you need to tear out the perforated bottom center of the tray, and twist four tabs that key into the bottom of the car and hold it in place. As a display piece this looks quite nice, and it is possible to put things back together for storage, but it's a shame that there is no way to remove the car without destroying part of the box. Mattel has done better in the past, so I know they're capable of better...this was just a poor decision.

The Batmobile's body is cast as a single monolithic piece of metal, and looks great. The lines are all straight and smooth, and all of the panel seams—including the fuel door—are done expertly. The parachutes, main exhaust, and license plate are the only things that suffer from being cast as part of the body, as their more intricate details would benefit from being done separately. Several details have been added with plastic components, including the Bat-Beam, roll bar (with separate antlers & beacon), rocket tubes, and grille inserts. The canopies, headlights, and Bat-Ray lenses are cast in clear plastic. The wheels are chrome plated plastic with rubber tires. The chassis is a single piece but has some decent detailing. The body is painted a nice deep gloss black, with only a hint of orange peel when viewed from certain angles. Bright orange stripes are applied to the nose, sides, and rear of the car. These look great overall, though there are small gaps around the front grille and a hint of ghosting along the trailing edge of the trunk lid. More orange is used for the trim ring at the end of the exhaust (good) and taillights (not so good). The Bat-Beam is painted gold, the beacon is silver with a red top, the antler lights are red, the window trim and rocket tubes are silver, and the Bat-Rays are transparent red. The cockpit is primarily cast in black plastic with a few added parts. Detailing here is simple but good: things like the Bat-Ram lever, Detect-A-Scope, compass, and indicator lights are all recognizable. The ribbed dashboard, door sweeps, and interior door handles are all here as well. Separate parts include the steering wheel (silver), Bat-Phone, Emergency Bat-Turn lever, fire extinguisher, and throttle lever (all orange).

The Batmobile has rolling wheels only.

Mattel took scans of the #1 Batmobile when they first acquired the license in 2007 and has been using that for everything but their 1/64 Hot Wheels Mainline release, so the body is as accurate as it gets. But the devil is in the detail, and there's a lot that Mattel is still getting wrong seven years into making replicas of this Batmobile (and having a community of fans offering help and suggestions). Some of the problem areas include: the headlights are clear but should be mesh-covered like the grilles, the stripes over the Bat-Ray lenses are missing, the suspension sits too high, and the door bats are wrong in both size and design. The biggest flaw, however, is the size of the Batmobile. Despite the packaging claiming it to be 1/24 and the release notes saying it is 9" long, the final product actually measures 8½" long, making it approximately 1/26.5 scale. It's not all bad news, though: the canopies are just about perfect, the roll bar looks good, and even though the Bat Spinners are not separate pieces, the wheels look fantastic.

The best 1/24 (ish) replica of the 1966 TV series Batmobile available to the general public is Polar Lights' model kit. They even have a prepainted version of it for those who don't want to deal with the hassle of trying to paint the pinstripes. But this isn't a bad runner-up, and it does have the advantages of weight (coming in at 1¼ lbs/.57kg) and the cool fishbowl package. If you're looking for a fun and durable little collectible for your desk or shelf and can overlook some of the missteps, then you'll be very happy with this. Mildly recommended.