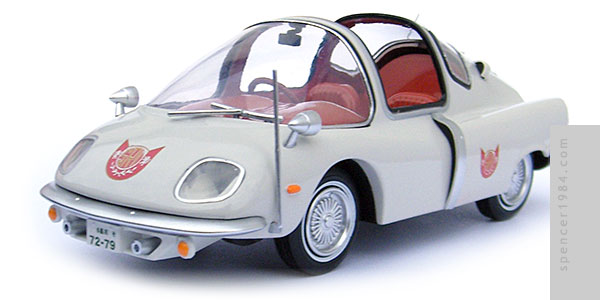 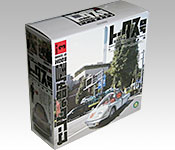 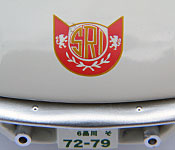 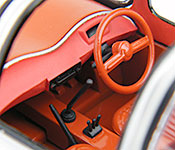 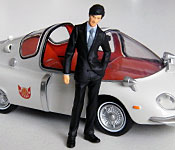 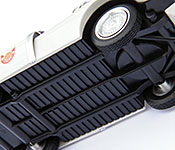 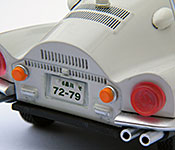 Kaiki Daisakusen (Operation: Mystery!) was a TV series that ran from September of 1968 through March of 1969. It followed a team from the Science Research Institute (SRI) as they investigated various strange and otherworldly phenomena in Japan. Among the tools at their disposal was the Tortoise, a custom two-seater that featured a bulletproof dome to protect the occupants and twin forward guns. The prop used in the series was built from a Subaru 360, a rear-engine car less than 118" (300cm) in length and weighing just 900lbs (410kg) to meet Japan's Kei car regulations.

The Tortoise is packed in a glossy cardboard box with a hinged front panel secured by a hook-and-loop fastener. The front of the box has a large photo of the model superimposed (using either forced perspective or Photoshop) over a picture of a street in Japan. "Room of Senmu/Room No. 3" is written up the left edge of the box ("Senmu" referring to Kaiyodo President Shuichi Miyawaki); the vehicle name, title of the show, and scale is in the top right corner. The sides of the box feature photos of Senmu and his "Guest" Noriaki Ikeda, show/vehicle info, and a front or rear view of the Tortoise with the Shirô/Shirou Maki figure. The top of the box repeats the text from the front panel (just condensed), and the bottom panel has hte "Romm of..." line overa photo of a toy room. The back panel has a large photo of Shuichi Miyawaki and Noriaki Ikeda in the room with the Tortoise on the table in front of them, a large wall of text, and the contact information for Kaiyodo. The inside of the flap is also mostly text, with photos of Shuichi Miyawaki and Noriaki Ikeda each holding the Tortoise model. The opposing panel has pictures and text detailing the show, car, and Shiro Maki. Cutouts in this panel reveal the car and figure, which are held securely between two plastic trays that slide out from the top or bottom of the box.

The Tortoise has a die cast metal body with plastic detail parts. These include the chin detail, bumpers, lights, mirrors, wiper, side vent trim, rear scoops, and exhaust tips. The headlight covers and canopies are clear plastic, the taillights are clear red plastic, and the antenna are a soft plastic. The main body and related components are painted off-white, with silver used for all the trim pieces. The marker lights are painted orange, while the window gaskets and rear deck vent are black. The SRI logo is printed in red on the Tortoise's nose and flanks, and a small Shinagawa-issued "72-79" license plate is mounted at both ends. Both painted and printed details are sharply defined and perfectly registered. There are a few light scuffs on the rear flanks, the wiper arm does not touch the cowl, and there is a small gap at the top os the windshield canopy, but nothing that really ruins the overall look. The interior is spartan but well done, with the steering wheel, column (with levers), gear shift, handbrake, and central switches all as separate pieces. The bulk of the interior is a glossy dark red, with a silver trim edge on the dash pad and black for the all of the lever, the switches/box, the radio face, and the instrument cluster. There is a little slop where the gasket rolls over the left sill, but otherwise the paint here is also very clean. The chassis is a single piece with a basic but passable representation of the Subaru's swing-arm suspension. The wheels are silver-painted plastic with vinyl whitewall tires.

A 1/24 scale figure of Shiro Maki is included. It has no articulation, but stands with no assistance easily. The paint work is generally clean, but does suffer from the "bug eyed" look common to figures in this scale.

The only discrepancy I find when compared to the original Tortoise is that the headlights are set too far back in their buckets (likely inevitable when translating the thin domed lens covers to 1/24). Otherwise, this is a very faithful representation of the car. Going by the wheelbase, the Tortoise scales out to be right around 1/24~1/25.

A very cool and unusual vehicle that has been wonderfully executed. A few minor hiccups hold it back, but not by much. Recommended.