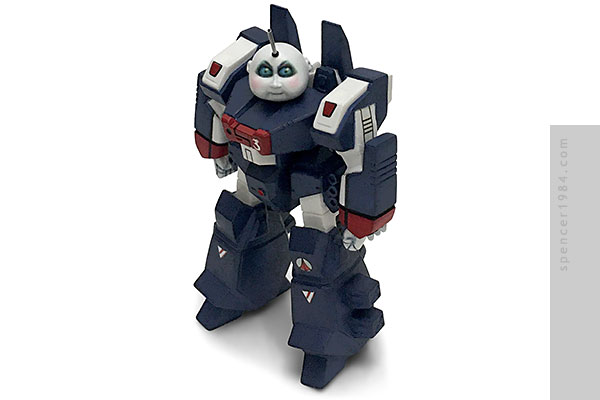 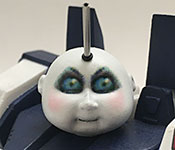 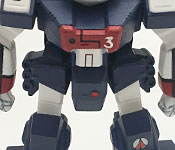 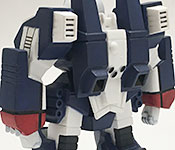 In the mid-1980s, before cell phones or handheld gaming devices, one of the best ways to annoy teachers and waste time on the school bus was Garbage Pail Kids. The brainchild of Art Spiegelman and illustrated by John Pound, they were everything a kid could want: gross art, irreverent humor, and delivered in the form of easily concealable cards. The third series was released in January '86, and among the characters was a "new style Japanese robot" based on the Macross VF-1S Armored Valkyrie under the monikers Hot Head Harvey (87a) or Roy Bot (87b). Arii just so happened to have one of these Valkyries in their 1/170 line, putting it eye-to-eye with a regular human figure in 1/24 scale. Not that scale was really a thing with GPK, but the later "Where are They Now" art showed Harv/Roy to be more-or-less adult human-sized and that was good enough for me.

Arii's 1/170 kits are extremely basic—fewer than two dozen parts plus decals—so detail was limited but not awful. Assembly is actually pretty decent, with details like the two-part lower legs fitting around the upper legs to give them a proper layered look. The only parts that were simplified beyond what I found acceptable were the hands, which I replaced with a set from the rider in LS' Mospeada/Robotech 1/24 kit. I also scribed the lines around the shoulders and chest to give them better definition, filled the sink marks on the shoulder pylons, and cleaned up the seams as everything got glued together. My last modification was to the stance: this kit was designed to have a very static look, with arms and legs held straight and parallel to the body. There were swivels at the shoulders, but that was it for articulation. I carved out the rear half of the pelvis and removed the tabs from the shoulder pegs so that I could position the arms and legs a little more naturally, as they were in the art.

Aside from these minor alterations, I had to make a couple more changes to match Pound's art. The most obvious is the head, which I cut off a small Cabbage Patch Kids ornament and sanded smooth to remove the hair and hook. Its forehead cannon is a section of metal tube from a Model Master glue bottle, finished with a micro O ring at the swivel. I also had to add the wrist missiles, which were cut from a cheap toy that had blunted spikes that were about the right size and shape.

Once assembled, I sprayed the whole figure with Duplicolor white primer. There was really no way to mask off the white areas on a figure this size, so I instead brush painted the remaining colors: Apple Barrel English Navy and Flamenco Red for the main body, with a Gundam Marker and LBX pen for the panel lines. The markings are a combination of kit-supplied, parts box, and custom decals, plus a hand-painted "3" on the chest.