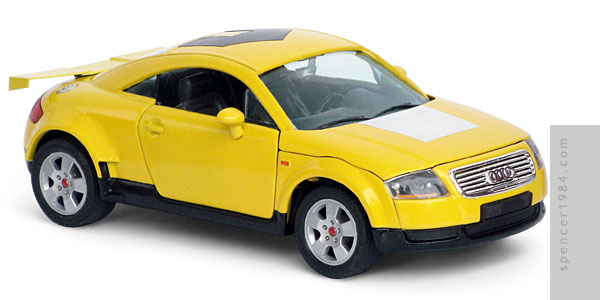 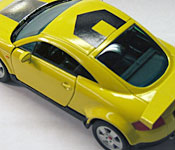 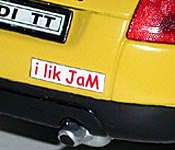 Hot Shot was one of the first of the Armada characters, and became a sort of icon for the whole series. Like the rest of the figures in Armada, his vehicle was loosely based on a 1:1 vehicle, but modified enough to avoid legal complications. Most of Hot Shot seemed to be based on the Audi TT coupe, an idea that was confirmed when the 1/64 Kabaya diecast car for Hot Shot was an Audi.

So although I was satisfied with my choice of base models, I was not completely happy with the finished model. Not that it was bad, I just felt I could get closer to the prototype. So, like Sideswipe and Sunstreaker before him, Hot Shot got a rebuild.

The biggest thing I feel I missed on my first attempt was the fender flares. The front flares were too chunky, the rear flares were too sharp, and the rear brake ducts were omitted entirely. This time, I made the rear fender flares by gluing square stock along the edge of each opening, which maintained the original profile and diameter. This also provided a good basis for the duct openings - I simply left out a section while I was adding filler, creating a scoop shape. Retaining the original diameter also meant that I did not have to modify the front wheel arches, and the stock tires could be used by lengthening the rear axle.

I also made a custom spoiler to reflect Hot Shot's three-tiered design. The rest of the custom work was done using paint and Bare Metal Foil over the existing bodywork. The windows were tinted using Future with a few drops of food coloring, and the graphics were drawn up in Illustrator as before.