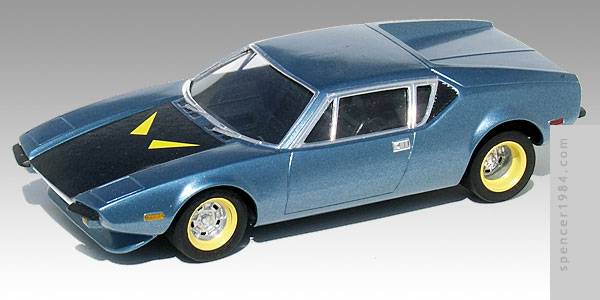 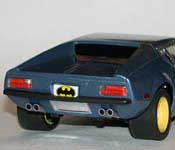 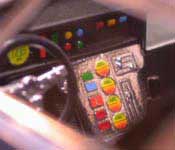 Cool Fact
In Batman #408, a DeTomaso Pantera serves as transportation for both Bruce Wayne and Batman. For Bruce, the car is solid red with no modifications and a more typical license plate.

This Batmobile appeared in Batman #408 as the car Jason Todd ripped off, leading to his first meeting with Batman. Though the car on the cover of the issue was a Lamborghini Countach, the car drawn throughout the rest of the comic is a DeTomaso Pantera. Modifications to the car were almost nonexistant, with the biggest change from a stock Pantera being the paint job.

I bought this model through eBay as finished but in need of restoration. In addition to being the wrong color for my needs (it was yellow and black), the car had a damaged roof and was missing some accessories. The roof was split lengthwise from the center of the windshield back to the rear hatch seam, resulting in an distinct depression nearly the full length of the roof. Fortunately it was only troublesome, not fatal. To fix this, I started by disassembling the car and stripping the body back to bare plastic. I then braced the roof back to it's original contour, and set the joint with a mix of baking powder and superglue. Once that was dry, I was able to fill the gap on the top side of the roof and sand it smooth.

With the roof fixed, I moved on to the rest of the car. The kit could be motorized so engine/chassis detail was practically nonexistant - after a good cleanup the base was ready to go. The interior needed quite a bit more work, since no door panels or front or rear bulkheads were included. However, because this was a Batmobile (so a totally stock interior was out), and because the comic never directly showed the inside of the car, I had quite a bit of freedom to design my own interior. The dashboard/center console was modified to include a TV monitor, extra speakers, and a control panel. I scratchbuilt door panels and firewalls using sheet styrene and miscellaneous parts box items. The floor was finished in Bare Metal Foil, while the rest of the interior was painted either flat or satin black. As a finishing touch, I replaced the stock gauges with a set of late-eighties style digital gauges.

PlastiKote light blue was used for most of the bodywork, with Testor's paints, Bare Metal Foil, and custom made labels and decals used for the details. The original glass panels were damaged when I removed them earlier, so I ended up making all new panels out of clear sheet stock. Just for the fun of it, I darkened the rear window with automotive Limo Tint film. The wheels were a bit of a compromise: in the comic book, when they were on the car, the wheels were solid yellow. However, in the scenes where Jason & Batman are bringing the tires back to the Batmobile, they are drawn as solid silver. Between that and the fact that solid yellow wheels were a bit garish, I decided to paint them yellow but have the centers silver. Though it't not nearly as customized as most of Batman's other vehicles, I really like the clean look of this car (not to mention the small but important role it played in the Batman universe).