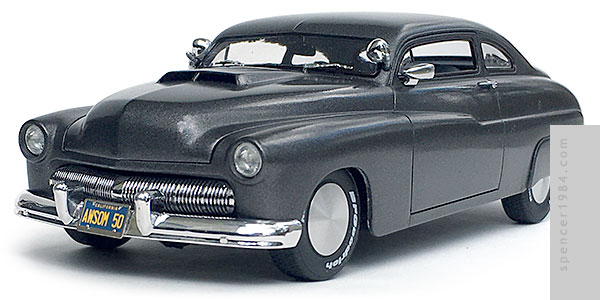 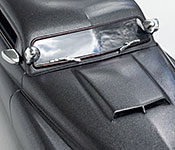 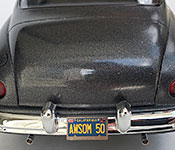 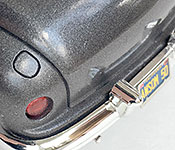 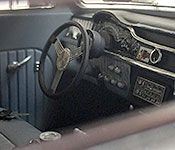 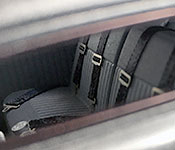 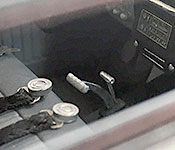 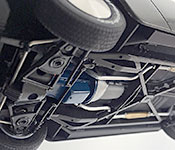 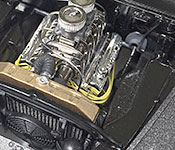 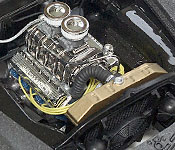 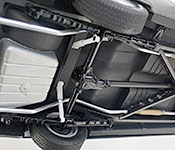 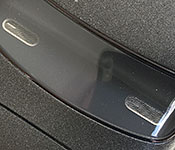 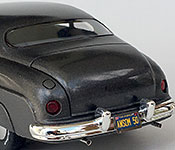 Although accepted as being a loose adaptation of Paula Gosling's Fair Game, Cobra owes just as much to Beverly Hills Cop. An early draft of that script, when Stallone was to be playing the lead character Axel Cobretti, featured many of the action-heavy scenes that would be featured in Cobra two years later. The one thing they did have in common? Classic American iron as the lead character's ride of choice.

To recreate Cobretti's Merc, I started with Revell's Custom Coupe. The kit's top is chopped a little more than it was on the movie car, but as a newer tooling with lots of extras, I was OK with that. I started by deepening the panel lines, cleaning up the mold parting seams, and filling in the holes for the mirror and parking lights with stretched sprue. Revell rounded the corners of the hood, a common treatment on 1:1 custom Mercs but incorrect for Cobra's car. I restored the original square corners by removing the bottom edge of the hood and replacing it with rectangular styrene stock, then cutting the body opening to match. The scoop was taken from AMT's '69 Cougar, blended into the hood and fit with the divider. Another popular custom touch that had to be undone was the gas flap. I made a template of the stock size and location from AMT's '49 Mercury, then transferred that to the rear fender on this car and carefully scribed the new break line. With all the mods complete, the body was set aside to cure while I moved on to the rest of the build.

Revell provides a Cadillac engine in the kit, which isn't bad but I wanted something a little more. I wanted to keep it in the Ford family, and what could be more appropriate for this particular driver than a 428 Cobra Jet? I sourced the block, heads, valve covers, exhaust manifolds, and front from the same Cougar that donated its scoop, mated that to a manual transmission from my parts box, and topped it with a modified Shelby Mustang intake manifold and the supercharger and drive belt from Revell's Fast & Furious Charger. The carburetors and air cleaners were the optional set from Revell's '69 Nova. All of this was a very tight fit into the Merc's engine bay - I had to remove the cast-in battery and fill in the inner fender to make room - but it worked. The only thing that absolutely would not fit is a mechanical fan, so I used a resin electric fan from Morgan Automotive Detail mounted on a scratch built frame. I also added scratch built wiring, fuel and nitrous lines, carburetor linkage, and vintage-appropriate flex hose for the radiator.

The chassis was mostly box stock. The exhaust pipes needed a minor adjustment to meet the 428's exhaust manifolds, and the axles needed more extensive tweaking to match the look of the movie car. First, the rear end was raised by removing the lowering blocks and gluing the rear axle directly to the leaf springs. I then made a set of traction bars and added those to the springs. Finally, both axles needed to be narrowed to fit the new wheels and tires. These were taken from Revell's '78 Firebird and received BF Goodrich-Radial T/A decals from Scale Equipment Ltd. and Moon caps from Parts by Parks.

Inside, I replaced the '49 dashboard with a '50 dash from Modelhaus. This was modified further with custom gauge decals, a photoetched radio face, and a scratch built nitrous switch panel. The shift lever is a highly modified NASCAR shifter with a custom T-handle complete with finger grips. Four-point harnesses were made from craft ribbon with a combination of photoetch and scratch built hardware. The door handles were resin parts by Replicas & Miniatures of Maryland, and the power window switches are Model Car Garage photoetch pieces. Finally, the rear speakers are more photoetch, this time from Detail Master. The interior was painted all in primers to recreate a tritone gray look: Duplicolor Hot Rod Gray for the darkest, Krylon for the medium, and Napa for the lightest.

Once all of these assemblies were complete, it was time to finish the body. I painted it "Cobra Slate Grey" by ScaleFinishes, polished but not clearcoated to recreate the movie car's semigloss appearance. I was able to use the kit's taillight buckets, but the lenses came from a 1/18 scale diecast Batmobile. The sideview mirrors were another item sourced from the '69 Cougar, reshaped and painted with Molotow Liquid Chrome to look like a set of vintage Sport Bullet mirrors. Spotlights came from AMT's '40 Ford kit. Door handles were modified from a Danbury Mint '59 Cadillac. The bumpers were customized parts from AMT's '49 Mercury, finished with a set of custom "AWSOM 50" license plates with Model Car Garage frames.