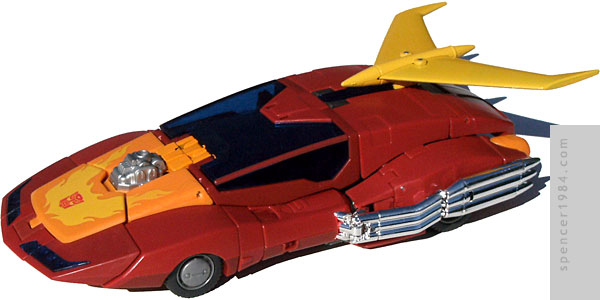 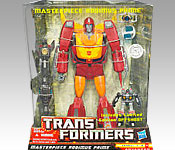 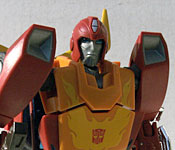 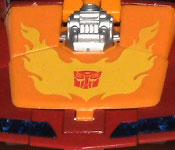 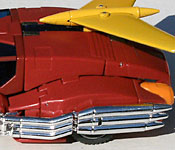 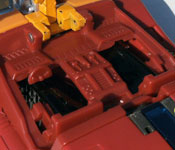 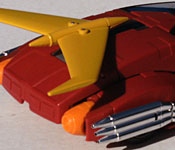 NOTE: Since this site is generally vehicle-oriented, this review will focus on that mode.

In 1986, Transformers: The Movie hit theaters and ushered in a whole new group of characters. One of these new characters was Hot Rod, a young Autobot who assumed the role of leader after the death of Optimus Prime. Takara released Masterpiece Rodimus in 2010, a complex figure that incorporated four modes in its design: Hot Rod, Hot Rod's car mode, Rodimus Prime, and Rodimus Prime's truck mode. The last was accomplished by including a separate trailer that could merge with a partially transformed car mode. When Hasbro brought the figure to the US as a Toys 'R' Us exclusive, they omitted the trailer and replaced it with smaller pack-ins to keep the cost down (Takara's initial release was more than three times the price of the TRU exclusive). Despite the lack of a trailer, this is still packaged as "Rodimus Prime" for trademark reasons.

All US-release Masterpiece figures come in a similar clear plastic box. It measures approximately 9" (23cm) wide, 10¾" (27cm) tall, and 3¾" (9cm) deep with the front panel being wider than the back. Most of it is made of clear plastic, with an Autobot logo relief on the top panel and "Masterpiece Rodimus Prime"/"Includes Limited Edition Offshoot" printed in yellow on the front panel. A TRU exclusive sticker is about ⅓ of the way down the right edge of this panel. The bottom of the packaging is a cardboard tray, tapered to reflect the design of the plastic box and printed with a red technical background. It has the Transformers logo, Hasbro logo, character name, age restriction, and skill level printed on the front panel. An Autobot logo is printed on the right side panel as you're facing the box, while Rodimus Prime's tech specs are printed on the left side panel. They give him a strength rating of 10/10, an intelligence rating of 10/10, a speed of 9/10, and endurance of 10/10, a rank of 10/10, courage of 7/10, fireblast (formerly firepower) of 10/10, and skill of 10/10. The back of the tray has a heavily-airbrushed photo of his vehicle mode (cleverly referred to as his "hot rod" mode without obvious caps to indicate a proper name) with Offshoot mounted on the front. The Hasbro logo and legal information is below and to the left of this, and the URL is below and to the right. The bottom of the tray has the UPC, more legal info, and an ad for the Transformers Collectors' Club. A cardboard panel is slid inside the rear of the box, printed with the same red background on the outside and a gray version of the background on the inside. The left side of this insert has a drawing of Rodimus, the right side has several close-up photos of his accessories with callouts, and the back panel has a large top-down photo of the figure holding the Matrix of Leadership, a smaller photo of Offshoot, and his bio. The figure is packaged in robot mode, with his left hand sporting one of his optional accessories and the rest of his accessories (as well as Offshoot) arranged in the tray around the figure. he is held in place by several rattan strings, which have replaced the wire twist-ties that were used with most Transformers figures.

Hot Rod is is entirely plastic in car mode. Some fans have lamented the minimal amount of metal parts (found only in the robot mode's feet), but given the extremely tight tolerances I think this is actually a good thing: without loosening many of the joints, paint wear on metal parts would appear almost immediately. Those tight tolerances really do help the look of the vehicle, though. With the exception of the seam across the hood & front fenders, and the area just above the forward ends of the exhaust pipes, the seams disappear from just a couple of feet away.

The bulk of the car is maroon, with a pretty good match painted on the top edges of the canopy. The hood and rear thrusters are cast in orange, and the canopy hinge has been painted to match this orange. There is a paint chip where the hinge components come together, but otherwise there are no flaws. A yellow flame deco with a red Autobot logo is printed on the hood. The headlights, canopy, and center section of the roof are transparent blue, and the engine is cast in matte silver. The wheels are cast in gray plastic with rubber tires, and are mounted in such a way that the center remains static while the wheel spins around it...less like "pinned wheels" and more like Batman Forever. The side pipes are the only chrome features, and look good save for the small sprue attachment points visible (these would be on the backs of the arm in robot mode, hence why they are more visible here). The rear wing has either been cast in yellow and then given a satin clearcoat, or painted satin yellow. It also has a rough sprue attachment point (near the forward tip), but is otherwise nice. There's another rough spot on the passenger's side of the leading edge of the canopy, and I had to trim one of the thigh panels before it could be moved into its proper position. These are small issues, but on something in this size/price class the assemblers at Hasbro should have cleaned these up a bit more. I do have to give them credit, though: other than these problems, the figure in general feels less fragile than the Takara version. It still requires patience and careful handling to get from one mode to the other, but it doesn't feel like its ready to break quite so easily.

The interior is minimal, with the robot mode's feet filling most of the space here. Still, there are seat backs, the top half of a steering wheel, and some dashboard components. Some extra paint would have been nice, but since you'll really only be looking at it through the darkly tinted canopy it's no great loss. The chassis is nothing more than folded up robot bits.

Being a Transformer, the big feature here is his ability to turn into a robot. As mentioned above, it requires a great deal of patience and care to make sure you don't break anything - but it can be done. In addition, Hot Rod also has the ability to turn into Rodimus Prime by swapping his face and adjusting his legs, arms, and rear wing. His head has a flip-down visor that looks a bit like a pair of sunglasses, and he comes with retractable hands that can be replaced with a spinning saw blade or a welder. Two Matricies of Leadership are included: the small one that came with the Takara MP Rodimus figure, and the larger that we first saw with the original MP Optimus Prime figure. The former stows in a compartment in the front of the car (robot mode lower chest), while the latter can be held in the robot mode's hands to recreate the iconic "light our darkest hour" scene from the movie. Finally, MP Rodimus comes with three weapons: two blasters that can combine to form one long rifle (nods to his original Hot Rod and Rodimus action figures, respectively) and his Targetmaster partner Offshoot. Offshoot stands approximately 2¾" (7cm) tall in robot mode, which works out to be about 5' 5" (168cm) in 1/24 scale. He converts into a double-barreled rifle, much like his G1 counterpart Firebolt. Any of the three weapons can fit into a port on the top of Hot Rod's engine, and so can be used in vehicle mode.

There's certainly no mistaking who this is, though it is not an exact copy of his toy, cartoon, or comic book appearance. The most obvious change is the lack of vertical struts holding the wing in place. The shapes of the windows, the lengths of the exhaust pipes, and several other details are different as well. This is more like a modern-day imagining of what the character looked like (much like Jada's Mach 5). As a fantasy vehicle, scale is a bit difficult to pin down. He is about 8¾" (22cm) long and 4" (10cm) wide at the wing, so he looks good with other 1/24 scale vehicles as well as the slightly smaller 1/26 - 1/28 scale Human Alliance figures.

Whether you get this or not is going to depend a lot on your feelings toward the character. If you were indifferent or outright disliked Hot Rod/Rodimus Prime, its an easy pass. If you liked the character, the original Transformers movie, or the general design, and plan to treat it with kid gloves, you shouldn't have any nasty surprises. Recommended.