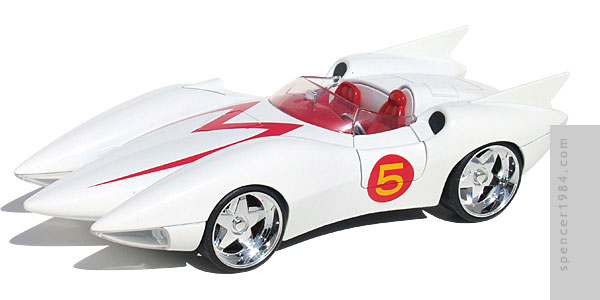 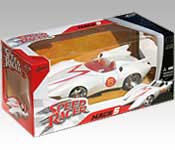 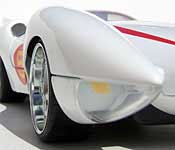 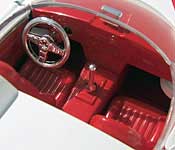 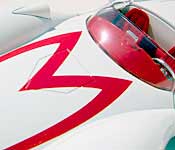 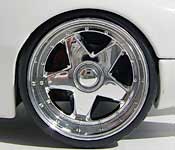 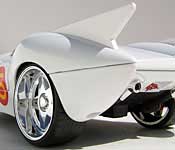 Speed Racer" logo is in the bottom left of the front paneltop left of the top panel, and top center of both end flaps. Jada's logo is printed in chrome silver in the top left corner of the front panel, "Mach 5" and a 3D rendering of the car are across the bottom, and the age restrictions and scale are on the right edge. The top panel repeats the "Mach 5" and Jada logo, while the end flaps repeat the rendering and Jada logo (only the front panel Jada logo is chrome - the rest are regular silver). The back of the box has a generic co-sell for their other "Classic Speed Racer products," but no details about what else they're offering. They also have web addresses for Jada and Speed Racer, along with the logos of both properties. The inside tray is a bright orange-yellow with the same ghosted checkered flag from the front & top panels. The Mach 5 is held to the tray by two screws and a plastic band holds the doors closed.

Jada's quality is pretty much a given at this point, and the Mach 5 is no exception. The casting is excellent, with tight panel lines and crisp edges. The contour lines match up well between separate pieces like the fenders/doors and upper & lower body halves. The way the headlight buckets are cast is quite neat, with deep sockets extending up into the fenders. The windshield, side windows, and headlight covers are cast in clear plastic, and chrome is used for the exhaust tips, mirror insert, and wheels. The tires are black vinyl. Jada's usual brakes with drilled rotors and red calipers are visible behind the wheels. The overall white is flawless, with a nice gloss and even coverage (including inside the door frames and headlight buckets). Paint applications are done equally well, with flat black rear scoops, yellow headlights, a gloss red hood "M," and gloss red and yellow rondels. A sticker is used for the "Speed Racer" logo plate. The cockpit is primarily bright red, with a chrome steering wheel, rearview mirror, and shift lever. The two main gauges are printed stickers. Chassis detail is a bit more intricate than usual, with exhaust pipes, mufflers, suspension components, the driveline, and a basic engine shape cast into the pan.

The Mach 5 has opening doors, with nice hinges that work smoothly and hold well both open and closed. However, the extremely small openings combined with the thick body shell make the doors completely useless for allowing a 1/24 Speed to get in or out of the car (at their full open position, there's a scale 6" (16cm) between the door panel and the rear fender...try squeezing through a six-inch opening next time you get in your car).

This is going to be a big sticking point for a lot of fans. Despite Jada's claim of this being the "Classic" Mach 5, it is very much not the car from the original TV series. Nor is it the car from the live-action movie. Instead, this is Jada's unique take on the design. Although it retains the standard "Mach 5" look, the proportions have been changed to give the car a larger nose, smaller cockpit, and more exaggerated fender bulges. It's a very tall car as well: although it only has six inches of ground clearance, the tops of the front fenders are 3'9" (115cm) tall. Another odd effect of the car's height is the extraordinary step-up to get in: the door sills are 18" (46cm) from the ground. Other reimagined details include a reshaped sideview mirror, 5-spoke wheels, low profile tires, and simpler fender openings. The cockpit is essentially identical to the original Mach 5, though it is smaller (both actually and proportianally). Other than the few size oddities mentioned above, it scales out to a pretty decent 1/24: at 16' (488cm) long and 6'6" (198cm) wide, it's roughly the size of a modern NASCAR racing car (though much larger than the original Mach 5).

There's no question that this is a technically superior diecast. The casting is well done, the paint is excellent, and the overall fit and finish are superb. However, the fact that it is a reimagining of the Mach 5 is going to be a dealbreaker for a lot of people who want a replica of the original version or the movie car. If you don't care for the swoopy sides, large wheels, or small cockpit, you're not going to be happy with it no matter how well done it is. If you like the redesign, or simply want a no-hassle replica that looks good, then I recommend that you grab one of these when you get the chance.