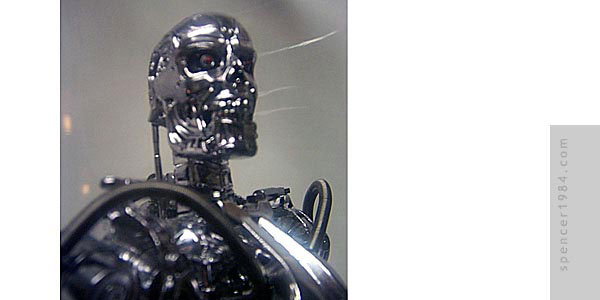 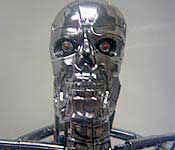 Tsukuda makes a very good representation of the endoskeleton from the Terminator movies. I found out researching this kit, though, that there seem to be several variations of the skeleton. For example, some T-800s have the hydraulic lines to the shoulders being fed up behind the clavicle pistons, while others distinctly show the lines in front. Other discrepancies happen in the arms, legs, and head, with cylinders changing sizes, positions, and numbers. Taking all of that into account, this kit did a pretty good job.

I built the model nearly box stock. It goes together nicely, although the instructions aren't very clear in some places. I did modify some of the cylinders in the neck and legs to give the Terminator a more dynamic pose, as he appears to be asleep in the pose suggested on the box/instructions. I also added a bar code to the back shelf of its pelvis, taken from the license plate from the Back to the Future II DeLorean.

The only real problem with the model is that the chrome plating made the figure look like a toy. To fix this, I sprayed the completed model with a thin layer of Testors Transparent Black Window Tint. It gave the skeleton a realistic metal finish, and also brought out the detail in the seams and joints.