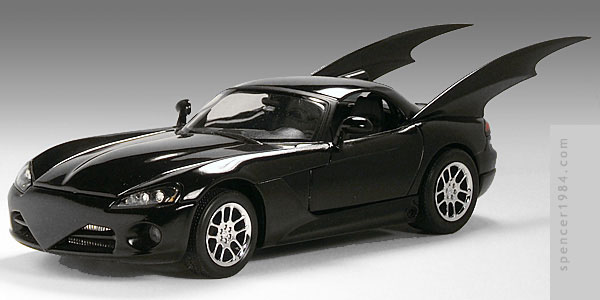 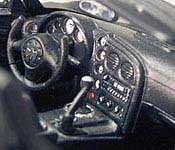 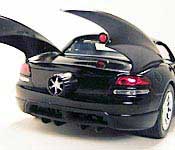 After the events of War Games at the end of 2004, Batman found himself on his own again. While on the job, he had to avoid the police, and used this Batmobile to do it.

I've picked up a few Welly cars in the past, and I've always been impressed with their quality (especially considering their price). After disassembly, I started converting it to a Batmobile by removing all factory scripting. I then added the grille shield, filled in the rear license plate and hood vents, and recut the trailing edge of the trunk lid. The fins are cut-down parts from Revell's Batman & Robin Batmobile, epoxied into place and carefully filled in to preserve the trunk lid. The roof was a bit of a challenge, as most Vipers are modeled as open-top roadsters. I found a donor in Motor Max's Viper coupe - overall a cheap-looking replica, but the roof was usable. Once the roof was cut off, I had to hammer the shape out a bit to get it to fit correctly. Once that was done, the upper nacelle was added and the car was ready for paint and reassembly. Final body details include a rocket nozzle taken from a 1/100 F-15 and a parts box intercooler. Inside, I made new gauges, recut the steering wheel, and added a monitor betwen the seats. The interior was then finished with seat belts and a photoetched bat symbol.