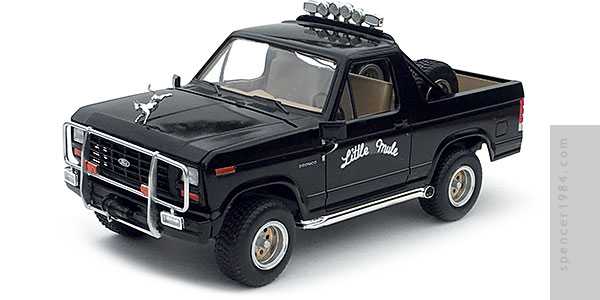 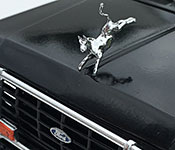 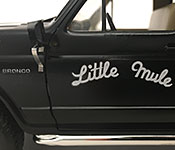 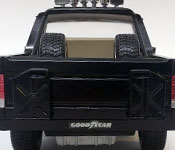 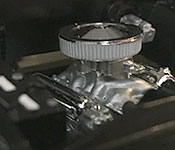 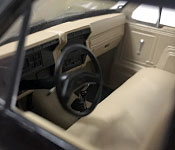 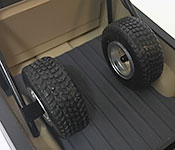 A while back, someone suggested that Revell's '80 Bronco had so many similarities to the one used in Romancing the Stone that it was basically an unofficial release of Pepe. While that isn't 100% accurate, I do have to agree that this kit gets you closer than any of the other Bronco kits out there.

Starting with the engine, I replaced the intake manifold and carburetor with performance parts out of a Mustang kit and topped it with a parts box air cleaner. I also replaced the power steering pump with a scratch built piece that looked a little closer to an actual pump. The rest of the engine and transmission was built stock and painted up as a clean crate motor.

The chassis would have been fine box stock if not for the cast-in single exhaust. I removed that, which meant rebuilding the frame's crossmembers using various thicknesses of sheet styrene. I also replaced the shocks and front springs with scratch built pieces, but the rest of the drivetrain and suspension fit together great with very little cleanup needed.

Inside, I carved out the console and made a new center floor section from thick sheet styrene. Once it was painted with Krylon's Make It Suede to add some carpeting texture, the patch disappeared completely. I used a bench seat out of my parts box, and made the cargo mat from Plastruct ribbed roof cut to fit the Bronco's rear. The interior was painted Tamiya TS-46 Light Sand, with flat black for the dash details and dark gray for the rubber mats and boots.

Lastly, the body needed a few changes to look like the Little Mule. I removed the Ford script on the hood, the horse emblems on the front fenders, the hinge and mount pin for the spare tire carrier, and the rear bumper filler panel. This was replaced with a rolled pan made from rectangular styrene stock, filled and sanded to blend in to the rest of the body. I also filled in the mount holes for the sideview mirrors, deepened the panel lines, and opened up the grille. The body, grille, and front bumper were all painted Tamiya TS-14 Black.

With all the major modifications done, it was time to take care of the little details. I cut apart the kit-supplied grille guard, moved the lower crossbar to the bottom, made a new loop from stainless steel rod, and added in lights from both this kit and my parts box. The mirror housings were cut from their plastic frames, and new frames were made from strips of aluminum glued to the front fenders. The six wheels are resin parts from HoppersBazaar, painted aluminum, gold, and chrome, and fitted to tires from a couple of diecast trucks. The roll bar was scratch built from styrene rod and the lights on top of it were spotlights from my parts box and repurposed from this kit. I was able to use the gas can provided in this kit, and the second one is from Revell's GMC pickup/snow plow kit. Both received new filler caps, and while they're not identical they are so close that it's almost impossible to see any differences once they were mounted. The rear "Goodyear" decal came from an old contingency sponsor sheet, and the "Little Mule" on each door was used from Slixx's Gasser Mini Sheet #36.

The final detail was the hood ornament, which was made by taking parts from several N scale horses to create the overall shape and then detailed with bits of plastic and wire to create the ears and tail. The left front leg is another piece of wire, cut long so it could be used to mount the ornament. Additional shaping for the sides, legs, and muzzle was done with both superglue and putty, and it was painted with Molotow Liquid Chrome.