The Walking Dead Daryl with Chopper 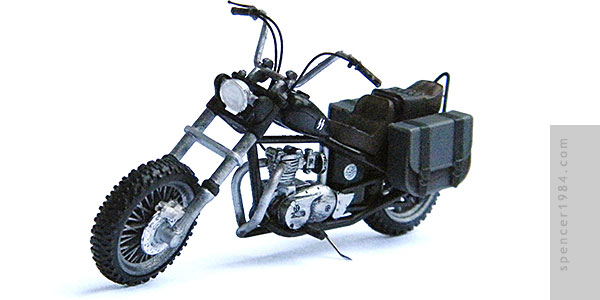 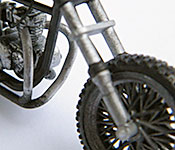 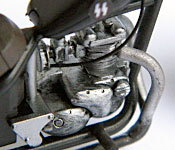 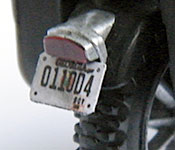 Cool Fact
Although used most frequently by Daryl Dixon, the Chopper actually belonged to his brother Merle. Early in the series, Daryl carries the bike around in the back of his pickup until it runs out of gas and he switches to the more nimble and fuel-efficient transportation.

When I first saw prototype photos of McFarlane's Walking Dead building block model series, I was cautiously optimistic. I've been wanting to build/collect something that represented the show, and modern building block sets have been getting very close to my preferred scale in recent years. I was sold on them as soon as I saw the actual sets at NYCC 2014: the vehicles looked to be a near-perfect 1/24, and they exhibited all of the top-notch sculpting McFarlane used to be known for. The first sets of the series hit stores the following weekend, and I had Daryl's Chopper in hand.

Assembly was simple but the parts breakdown was done well. Much of the bike went together without modification, and in many cases without any extra paint needed. But I did have to make some changes.

First, the front wheel was too wide for the tire. I used a cutoff wheel in the Dremel to slice the wheel in half, and inadvertently cut too close to one side. This opened a few of the spokes, and I liked the look so much that I relieved more of the inside of the wheel so I could open all of the spokes. I also cut off the front brake, and made a new one out of scraps from my parts box. The headlight was also from my parts box, set in a socket made from drilling out the cast-in lens. Brake, clutch, and throttle lines were made from wire, the kick stand was made from a straight pin, and the foot pegs were made from styrene rod stock. Finally, the bar in the back was cut off and a more realistic piece was made from wire.

Once the modifications were complete, I did some paint touch-ups: the front forks needed to be repainted from where I carved off the brake, and the wheels were painted silver to remove some of the plastic-y look. The headlight bracket, taillight bracket, and exhaust pipe were painted for better realism. The rear license plate was based on the larger McFarlane statue, and the tank stickers were made to mach the screen-used bike. A light weathering, and my first Walking Dead model was complete!