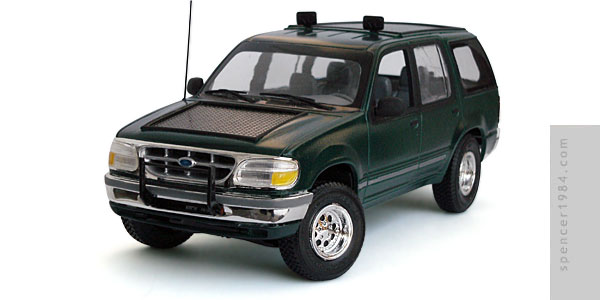 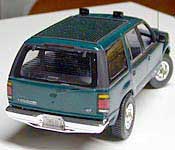 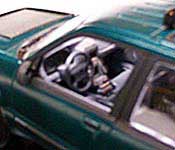 For anyone who is not familiar with it, this model was based on the book The Lost World, not the movie. The movie was quite different from the novel in many respects, including the vehicles they used.

In the book, one of the two main vehicles used was a Ford Explorer that had been modified into an off road electric vehicle. There were several descriptions of the vehicle throughout the book, including:

"...a dark-green Ford Explorer with its roof cut open...a large flat panel of black solar cells over the top of the car..."
"...build them strong—light and strong both...off petroleum base, and off the grid...an immensely strong portable laboratory to go where there's no gasoline and no electricity..."
"...black photovoltaic panels on the roof and hood, the inside crammed with glowing electronic equipment..."

Other minor details of the Explorer included a power winch in the front of the truck and clips for an electric motorcycle on the tailgate. The interior color is not specified, but the RV built to go with the Ford had a gray interior, so that seemed like a reasonable choice.

Modifications to the kit are mild. I added the solar cells to the roof and hood, although my cells are square, and the book refers to them as octagonal (I couldn't figure out how octagonal cells fit together as a panel). I also replaced the standard V6 with a custom built electric motor made from sheet styrene and pieces of the original engine, such as power steering pump, A/C pump, and transmission. The model was originally a 4WD, but I converted it to a 2WD with heavy-duty shocks and drive train. The power winch is behind the front bumper, and I have not yet added the clips to the tailgate. The interior has the most work: I replaced the stock seats with four custom buckets, and rebuilt the dashboard with components from a Ford Crown Victoria police car, a stock car, and strip styrene. I also added a permanent tool chest inside the tailgate.

I did not go with the "armored truck" style shown in the movie for a couple of reasons. First, I didn't think that a vehicle with steel slats all over it would be "light and strong". Second, the trucks in the movie were true off-roaders—anything that far from stock would really stand out, but the book gave the impression that the Explorer looked fairly normal.