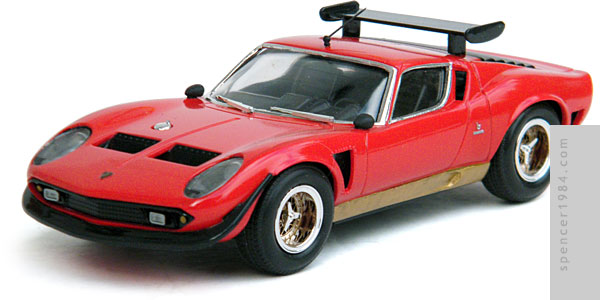 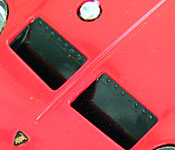 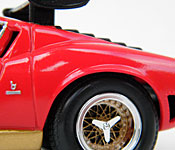 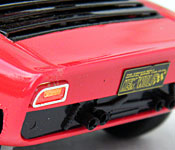 Like the Lotus Europa, I wanted to build this as a simple out-of-the-box project that I could enjoy and get finished quickly. It turns out that this was a much weaker kit than the Europa and there were a few things that I just couldn't accept, even on a very basic kit like this.

The first thing that I had to do was modify the fuel fill. Doyusha provided a rather terrible looking cap that was supposed to be glued directly to the hood, rather than the recessed style used on the Jota. To fix it, I drilled a hole in the hood, thinned the material around the opening, and added a blank to the underside of the hood to support a new cap from my parts box. I also replaced the antenna with a piece of wire, and fixed the headlights like I did with the Yanky Mate. For that model I added true buckets, but that wouldn't work here thanks to the lack of space. Instead, I cut circles of printed headlights (from the same sheet that provided the headlights for my A-Team van) and placed them behind the clear lenses. I also removed all of the mold separation lines and gave it a light coat of Tamiya TS-8 to give it a more appropriate tone and sheen. Finally, the front spoiler did not quite fit the Lamborghini's nose, so I needed to do a little reshaping and filling to make it look right.

Once all of the sub-assemblies were done, I did a final assembly and immediately rejected the tires and wheels. They actually weren't too bad on their own—a little small, maybe, but not obviously so—but once they were set inside the fenders they became a bad joke. There was a scale 6" - 8" of gap around each wheel, and any work that I did elsewhere was lost with the goofiness of this. Fortunately, I had a set of wheels and tires in my parts box that not only corrected this, they also came closer to matching the manga. These new wheels even had mounting holes large enough to accept the kit-supplied poly caps, so I didn't need to modify anything to get them installed. The only downside was that the new tires were large enough that they rubbed against some of the model's internals, preventing it from functioning as a motorized racer. No real loss there, though.

Once that was fixed, the rest of the build was simply a matter of detailing things with paint and BMF. It's still far from my favorite model, but it's a decent "3-footer" and makes a good companion for the Europa.