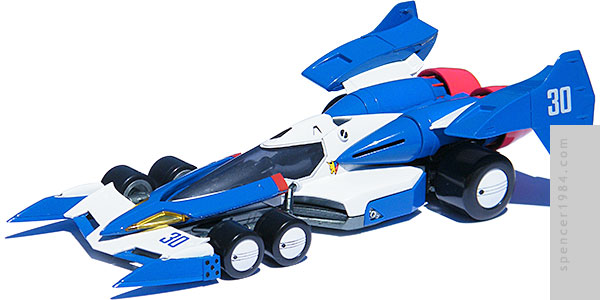 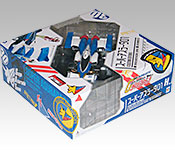 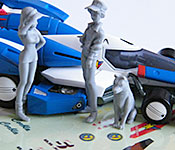 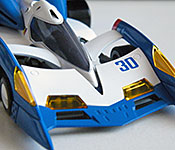 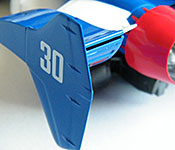 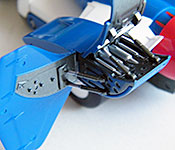 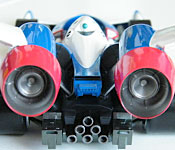 In the far-off future of 2015, artificially intelligent computers called "Cyber Systems" have been installed in Formula racers to help improve racers' abilities and reduce accidents on the track. Kojiro Sugo is the head of the Sugo Corporation, one of the companies that backs these new cars. Although his son Osamu was initially reluctant to endorse the enhanced machines, his daughter Asuka joined the Sugo Cyber Formula team and was acting manager when Hayato Kazami joined the team. Her Siberian Husky Buihachi (V8) is the team's mascot and occasional comic relief. Miki Jounouchi is the Sugo team's chief mechanic, before having a change of heart about Shinjyo and joining Aoi Formula.

The package is a square cardboard box, approximately 10¾" (27cm) on a side and 4" (10cm) deep. The window is an irregular diagonal slash across the top and opposing end panels, with a large photo of the Super Asurada with figures, "Variable Action" logo, and Sugo logo on one side of the window and the name, stats, and "Custom Edition" on the other. The text and photos are oriented in such a way that there is no "front." One of the side panels with the window continues the photo of the car and repeats the Sugo logo and stats, while the other one has the series' logo, stats, and Mega House/Sunrise logos. These panels are all printed in blue and white to match the team's colors. The other two side panels are solid blue, and have line art and full detail drawings of the Super Asurada 01 under its name and stats. The bottom has multiple photographs of the model along with detailed views and descriptions of its features. It also has all of the legal and contact info. Inside, the car is sandwiched between two clear plastic trays and a printed background that mimics a garage or pit stall (with doors around the sides and what appears to be a circular lift centered under the car). The trays are taped together, but nest so securely that the car and accessories can be repackaged easily. The car is placed in the tray on a black display base that includes the car name, driver, and number printed in white. The base and car are keyed to each other, but not fastened together (a small screw is provided in a separate baggie for those that wish to do so). Unpainted gray figures of Asuka Sugo, Miki Jounouchi, and Buihachi with their respective stands are included in a multi-pouch baggie that is wraped and held inside the lower tray. The optional parts to switch between circuit mode and aero mode are held in individual indentations surrounding the car. The instruction and decals sheets are slipped between the lower tray and the outer box to keep them flat, with the decals furter protected in a resealable plastic bag. The packaging is a slight departure from Mega House's regular Cyber Formula series with the product photo on the box and the extra decal and instruction sheets, but maintains the size and overall aesthetic we have come to expect from them.

As usual, the casting and assembly work is great. Everything fits together tightly, the panels all flow smoothly, and the details are all sharply defined. The chassis is the sole diecast component, and transparent plastics are used for the headlights (yellow) and canopy (smoke). Everything else is opaque plastic, with a pretty even distribution of blue and white. Black is used for the vents and wheel details, silver is used for the mirror glass, side details, lift fans, lower piping, and jet exhaust innards, copper is used for the rear axles, red is used for the mirror housings and jet nozzles, metallic red is used for the taillights, metallic turquoise is used for the dorsal light, and gunmetal is used for the chassis, front suspension, lift motors, and lower/main engine. A blue number 30 is printed on the forward wing, the Sugo logo is printed just behind the canopy on each side, and a white 30 is printed on the rudders. Most of this work is outstanding, with sharp edges and no registration flaws. There is a tiny amount of bleed on the edges of the sideview mirrors, but you really have to check closely. The bigger problem came from the attachment points of the vertical stabilizers: the primary connection is a rectangular tab that plugs into the side of the wing nacelle, but there was so much paint on the tab that neither of the closed stabilizers would fit. Correcting the problem took less than a minute with a sharp knife to scrape the excess paint off, but it was an error that they could have easily avoided. The other thing that I don't care for is the inclusion of a figure in the cockpit. Even if I wanted a driver in the car (I don't), I probably would not have wanted an unpainted gray figure that can not be removed. This was, frankly, a dumb choice on Mega House's part.

Even more than usual this time around: a swappable front wing to go from circuit to aero mode; two-stage retractable waist-mounted lift fans; retractable jet engines; wings that can be repositioned from horizontal to approximately 30°; extendable wing nacelles; and finally, the rear nacelle covers and vertical stabilizers can be swapped for a set of extended air brakes complete with actuator arms. Everything changes flawlessly, and the joints are neither too loose nor overly tight. Really excellent work all around. You also get three unpainted gray figures: Asuka Sugo, Miki Jounouchi, and Buihachi. The details are, as usual, sharp and clean across all three. You can use the included stands, but you can get them to stand near the Super Asurada with a little creative use of its myriad wings and pods. Finally, a set of peel & stick decals are included so you can decorate the car. These include stripes, tire markings, a sun strip, sponsors, driver names, and warning labels. They look pretty sharp on the sheet, but I will not be using them.

From a purely technical standpoint the Super Asurada is very good, bordering on excellent. The paint error with the wings is a bit of a misstep, but not fatally so and is easily corrected. I appreciate getting some non-driver figures, too. But the inclusion of the driver and do-it-yourself markings is a little off. They should've either done a fully painted driver or (preferably) left it out altogether. Similarly, they should have either put the full markings on or left out the extra sheet. Anyone who wants to customize their Cyber Formula cars can choose from the dozens of kits that Aoshima has released over the years. I really like the car, but a couple of better choices from Mega House could have meant I loved it.