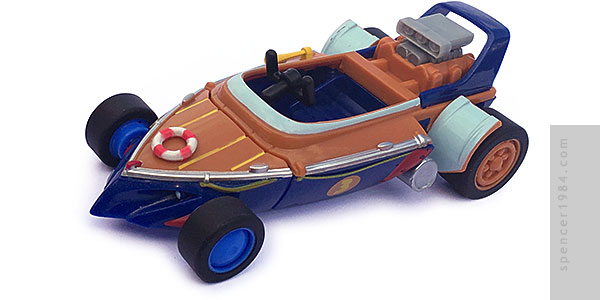 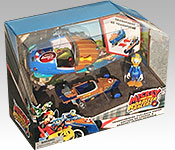 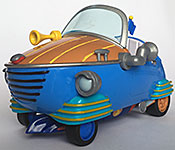 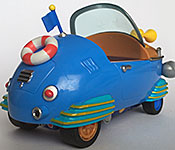 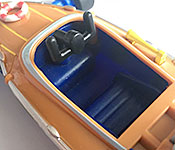 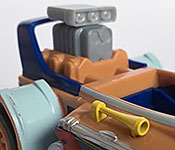 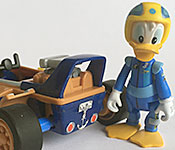 After ten years on the air, Mickey Mouse Clubhouse was replaced in January 2017 with an all-new series aimed at preschoolers, Mickey and the Roadster Racers. The new series follows the "Sensational Six"—Mickey, Minnie, Goofy, Donald, Daisy, and Pluto—as they race around the world. Each driver has a unique vehicle that converts from a street car to an open-top racer, with Donald driving the blue "Cabin Cruiser."

The Roadster Racers cars are packed in a large window box, measuring 11" (28cm) x 4¾" (12cm) x 8¼" (21cm). While it's massively oversized for the car, it does allow the contents to be easily viewed through the big window. The front of the box also has a portrait of Mickey, Donald, and Goofy in their respective rides racing along a course that wraps around the left end panel. The series title and "Transforming Pullback Racer" is printed in the lower right corner. A Disney Store exclusive sticker is affixed near the top left corner. Both end flaps repeat the title, and while the contents can be removed either way it's far easier to get them out of the left side. The top and bottom are blank blue and black, respectively, and the back panel has all of the legal info below three photos that serve as the instructions for Donald's car (see "Features/Accessories" below). Donald and his car's parts are held to a folded tray that easily slides out of the box. Donald and the car shell are all held in place with plastic zip ties, and the racer is held with plastic bands. To save yourself time and frustration, have a set of side cutters on hand to go through all four in short order.

Donald's car has what is probably the most complex shell of any of the cars in this series. The bulk of it is light blue ABS, with a brown panel for the "wooden" deck, white for the interior, and clear for the windshield. Silvery-gray plastic is used for the bow light, headlights, cleats, and side mirror (the latter is shaped like a speaking tube, a nice touch). The horn is yellow, the life ring is white, and the flag is a soft blue vinyl. Most of this is OK, though there is a big smear of glue across the left side. The paint is better here than on some of the other racers: teal, yellow, black, red, light blue, and silver are used to detail the vehicle and, for the most part, look good. A few errant edges here & there, but nothing too sloppy.

The racer is also pretty decent: the dark blue plastic has a faint metalflake that looks much better than the plain plastics used elsewhere, and the parts fit and assembly is solid. There are several paint apps here as well, and like the body they're generally well done though there are a few rough edges. The steering wheel is shaped like a control yoke, made of the same soft vinyl we saw in Minnie and Goofy's cars, but the shorter, simpler design both looks better and should cause fewer problems for kids and parents trying to get Donald in and out of the car.

The whole point of this series is the "transforming car" gimmick. This is probably the weakest part of this toy for a couple of reasons. First, the "street" version looks awful. The shell itself is nice enough (see above), but it just doesn't fit over the racer. With everything fully snapped together, you're left with what looks like a boat sitting on top of a car, with the nose, sides, and wheels of the racer almost fully visible. If you put Donald in the seat in this mode, he ends up sitting so low that there's no way he can see out the windshield. You'll have to stick him in there standing up or hung by his arm from one of the door panels to look OK.

Transforming to "racer" mode involves pulling the (fully visible) racer out of the bottom of the shell. The end. Sure, the body extends just ahead of the windshield, and you can pull the wheels and engine out, but doing so to any of them looks ridiculous. The extensions manage to mimic the halfway point of the animated transformation sequence from the show, but that's it.

Finally, a Donald figure is included, dressed in a two-tone blue racing suit. His paint is better than any of the other figures in the series, but he still feels ready to break any time with floppy-but-ineffective joints. he does grasp the steering wheel, a first for this series, but his feet are too wide to fit in the cockpit without squeezing them together and wedging him in there so hit butt floats just above the seat.

Ignoring the "extended" mode (as most of the official photos seem to have done), this is a decent enough replica of Donald's car. The only real drawback in street mode is the too-high stance, but thanks to the full fender skirts it actually looks pretty good without anything under it. The racer is a little too small, more like a go-kart than an F1 racer, but it still captures the look and feel of the animation model. In roadster form the car is approximately 3" (8cm) wide and 5½" (14cm) long; in racer mode it's 2¼" (6cm) x 4½" (12cm). Racer mode can be expanded to 2¾" (7cm) x 5¼" (14cm)

Like Mickey, this is just about what I had hoped the whole Roadster Racers series would be like: hardly Danbury Mint precision, but it's something that looks good in both modes and seems like it shouldn't cause any major problems for younger audiences. The figure still feels very cheap and possibly damage-prone, but the vehicle itself is easily recommended.