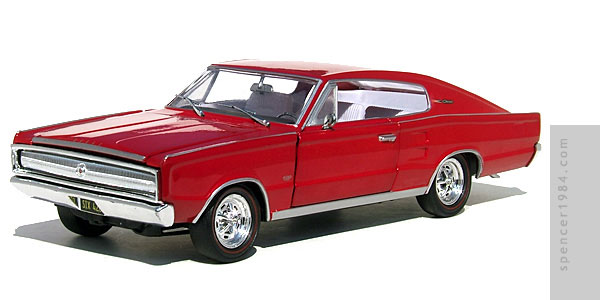 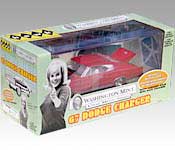 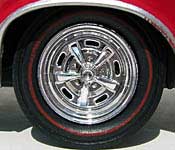 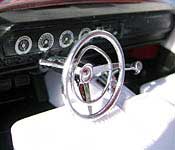 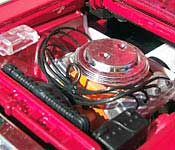 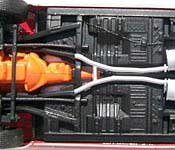 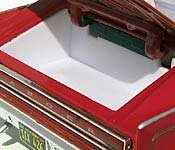 Hawk's packaging provides the best of both worlds. The primary window box is a light green, and is covered by elements from the 1967 Charger magazine advertisement. The "Charger Girl" is just to the left of the window, while the Washington Mint logo is beneath it. "67 Dodge Charger" is written across the bottom of the front panel, and the scale and a callout about the included display case are on the right panel. The top of the box features the Hawk and Washington Mint logos. Each end flap repeats both logos, the 67 Dodge Charger text, the display case callout, scale, and the advertising elements. They also include line art of the Charger in the middle and retro Dodge & Chrysler logos in the bottom corners. The back of the box repeats everything found on the end flaps, just larger and spread out more. The line art has been colored on this panel, and three photos showing details of the diecast are also included. All of the legal information is on the bottom of the box. Inside, the car is packaged inside of a hard plastic display case, and is held in place by four screws. A plastic strip holds the doors closed, while stiffer plastic pieces hold the hood and trunk open. The display case is the standard "Lindberg" display case, with tapered sides and a chrome diamond-plate base. Behind the case, more pieces of the vintage advertisement and two large Chrysler pentagons form a backdrop. The display case-in-the-box is a great idea, because it protects the car far better than a box alone would, while the box provides a cool retro look.

The first impression out of the box is that this is a great looking piece. The paint looks nice & even, with no ghosting or rough spots, delicate detail work, and generally clean trim. However, there are a few less-than-perfect spots that pull down the overall model. First, the bad: none of the panels seem to fit all that well. The trunk on my car doesn't close all the way (it can be forced closed, but pops up 1/16" as soon as I let go), the driver's door sticks out at the top, the passengers' door is back too far so it won't close all the way, and the hood suffers from the same pop-up problem as the trunk. Fortunately, almost all of these seem pretty easy to fix. I was able to get both doors to fit by carefully bending the door hinges, and backing off on the four body mounting screws by a turn or two loosened things enough for the hood an trunk to close properly. Unfortunately, some things aren't as easy to fix. The grille sticks out too far, there is a badly painted trim stripe painted on the hood (yes, the Charger is supposed to have a strip of chrome along the front edge of the hood, but it's supposed to be a very thin strip, and it's supposed to be part of the grille surround). The trim is rough in a few other places as well; particularly around the door handles and wheel arches where there is a great deal of bleed and some scuffing. There is also a 1/4" chip in the paint behind the passengers' rear wheel opening, luckily it is on the very bottom so it's not too obvious. All this is not to say that the car is bad: far from it. As noted above, the base red is very well done. The plastic components all look perfect, with fine detailing and clean plating. I'm especially impressed by the interior, which was made from a mix of black, white, and plated plastic. The only paint I see is the bottom halves of the door panels; otherwise, everything was cast in color and from enough separate pieces to provide a very clean, well-detailed look. The only thing that stands out as wrong is the all-chrome steering wheel; a little paint (or an all-white piece with painted spokes) would've looked better, but that's a minor nitpick. The engine looks good as well, though the details they chose to add are a bit unusual. There are separate ignition wires, a clear reservoir on the passengers' fender, a separate battery, a separate radiator, and a well-detailed fan/belt/alternator piece. But there is no firewall (and hence, no master cylinder/booster) and no radiator hoses. The detail is still far better than many diecasts in this range. Chassis detail is excellent, with detailed suspension components, fuel lines, and exhaust system. They even remembered to include the fuel filler tube.

The hood, doors, and trunk all open, and the front wheels are posable. As noted above, panel fit is a bit off straight from the box, but can be fixed easily enough. Whoever designed the front end deserves a great deal of credit, because it's one of the few in the diecast world that doesn't look like it was made of 2x4s. Great job!

Hawk did an excellent job capturing the look of the Charger. From the fender trim to the unique fastback roof, everything looks the way it should. The emblems all look nice and clean, with the correct "DODGE" on the hood, "426 HEMI" in the front fenders, "Charger" on the rear roof pillar, and "CHARGER" across the taillight. Interior, chassis, and engine detail look good as well. The incorrect trim across the leading edge of the hood is kind of annoying, though, as it throws off the look of the nose and runs into the hood script. Also, the car is missing the fender-mounted turn signals that were introduced in '67. Scaling is pretty good, if a hair small...it works out to be 1/24.5 all the way around, though all the parts are in proportion to each other.

This was almost a home run, but a few minor missteps held it back. With a bit tighter QC on the paint and parts fit, I think it would really be a winner. The innovation shown with much of the detail work is fantastic, and the base for a real showpiece is definitely here. Or, if you don't want to do any work on it, you have the option of leaving it in one of the coolest display boxes I've seen and it will look great in there. Recommended.