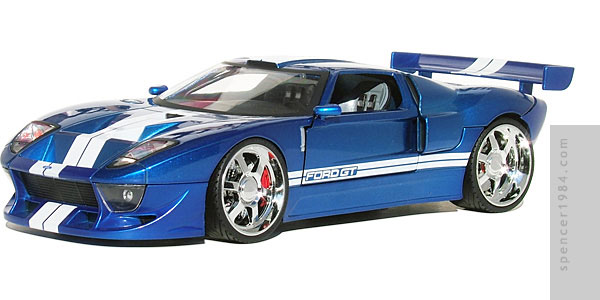 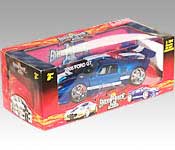 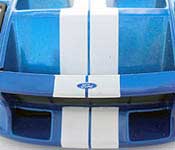 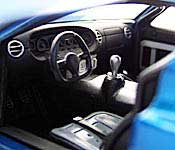 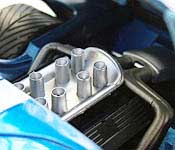 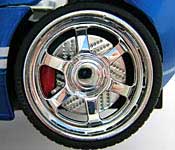 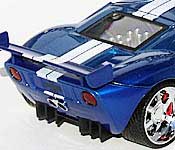 The GT is packaged in a fire-themed window box with clear panels at both ends and a large clear panel for the front/top of the box. The 1BR logo in the bottom center is flanked by drawings of their Shelby GR-1 and GT, with more logos and drawings of their Mustang and Corvette on the ends. The back of the box features the specifics about the car, including both performance and aesthetic modifications and an engine speed/torque/horsepower graph (the statistics are identical to the '05 Mustang: 750rwhp and 700lb-ft@~4700rpm). A large "flipped" version of the GT seen on the front of the box is repeated to the right of the statistics block. The bottom of the box includes information about the current and prevous waves, as well as the 1BR contact info and legal info. Inside, the car is posed with the drivers' door open. It is held in place with two screws and a plastic stretch band around the rear of the car, holding the engine hatch closed.

As usual, the fit and finish here are solid. Both metal and plastic pieces are well done, with crisp castings, smooth paint, and clean detail work. The GT is covered in various vents and scoops, and although modified for this verion they still provide an adequate workout for 1BR's sculpters. There are a couple of minor casting flaws around the edge of the rear clamshell, and the white stripes bleed a little deep in the front recesses, but neither hurt the overall appearance of the car. The rest of the striping is very sharp, as is the Ford emblem, 1BR logo, scoop openings, and fuel caps. The "glass" is also flawless, both in the windows and in the light shields. The wheels are clearly inspired by the original GT's wheels, and are wrapped with low profile tires with - gasp! - real sidewall detail. Sure, they're "One Badd Ride" brand tires, but the fact that the tires have this detail adds a nice touch of realism. Speaking of realistic details, the brakes have a nice combination of static calipers and free-spinning cross-drilled rotors. The engine is simplified, but the top end detail is beautiful - including hollow intake bells. Inside, the dash details and center console are cleanly painted, and the seats feature separate 5-point belts.

The doors and clamshell open, and although the front wheels are on pivots the close fender openings and large wheels prevent any real movement. The hinges are smooth operating and the panels shut tightly.

The overall shape of the GT is unmistakable, though 1BR has added their own custom touches. Word has it that Ford is very protective of the GT, and 1BR is the only company to get a license to create a non-stock version of the car. The result is a vehicle that looks to be a race course version of the stock GT, with front and rear spoilers, wider fenders, larger wheels, bigger intake and cooling scoops, a different intake, racing seats, and dual fuel tanks. Scaling is near-perfect, though the wheels still don't quite match the box art.

This is easily one of the best cars to come from 1BR. There aren't many replicas of the GT out there, and none that have been customized like this. The modifications fit the design of the car well, and the finished car is executed almost perfectly. Highly recommended.