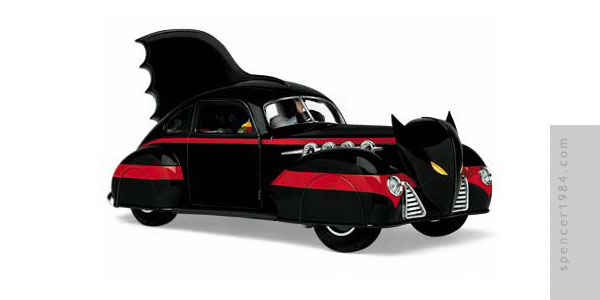 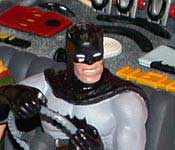 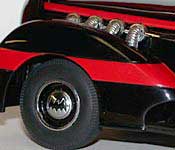 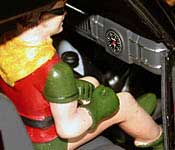 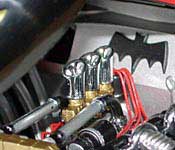 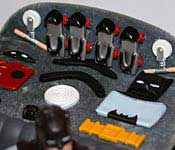 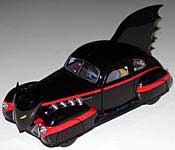 Standard Danbury Mint packaging: safe & strong, but not much to look at. The model comes in a plain white box with "1940's Comic Book Batmobile" written across the top, above an era-appropriate bat logo. The model is secured between two styrofoam pieces, with the fender skirts packed separately.

A primarily diecast metal body, with plastic accessories, vinyl tires, and bright chrome trim. The paint is up to the Danbury Mint's usual standards, with a brightly polished and nearly flawless gloss black set off with bright red stripes on all four fenders and along the trim line. Inside, Batman sits behind the wheel with Robin riding shotgun. The dash is nicely detailed with chrome accents and era-appropriate gauges. Behind the front seat is a shelf with a set of costumes, a flashlight, a batarang, a rope coil, zip line pulleys, and two sets of bat-skates. Under the hood is a resonable representation of an early Ford flathead V8, complete with plug wires, radiator hoses, and a tri-carb intake.

The hood and doors open, all four fender skirts are removable, and the front wheels can e posed. The hood is particularly well done, opening on a set of delicate scissor hinges with actual coil springs. The doors have a reasonable representation of early door hinges, and feature DM's pin locking mechanism. The figures are, unfortunately, glued solidly into place, as are all of the back dash accessories - nothing can be removed from the interior without major surgery.

Based on the cover art from batman #20, the Danbury Mint did a great job capturing the car in 3-D. From the shape of the open grilles to the scalloped fenders, the sculpting of Batman & Robin, and the details in the back, nothing was overlooked. Well, nearly nothing. While they almost perfectly captured the Batmobile, the Danbury Mint missed the mark a bit with the real-world features. The chassis is an excellent representation of an early '40s Ford design, but the engine is an odd-looking combination of features. The block is clearly Ford Flathead V8-based, but it has the wrong number of exhaust pipes (eight instead of six), and the distributor is the wrong style and at the wrong end of the block. It works well enough in the Batmobile, but anyone familiar with the Flathead V8s will be scratching their heads at this.

I have seen many Danbury Mint cars, and this is easily one of their best. The engine is a very small detail to nitpick, especially considering how nice the finished piece looks. The fit & finish are beautiful, and the neat little features like the details in the back and functional hood hinges really make it stand out. The price is admittedly high, but I really felt that I got what I paid for here. If I had any complaint, it would be that the figures are not easily removable. DM has had removable figures in other replicas, and the appearance of Batman & Robin take away from the realism of the Batmobile. If you don't mind the figures (or the work to remove them), I highly recommend this replica.