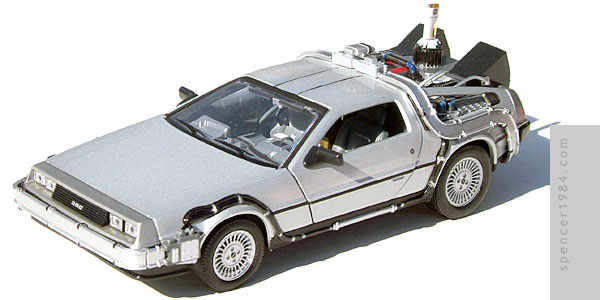 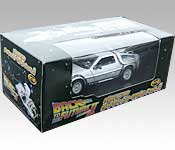 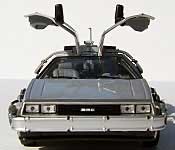 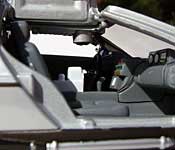 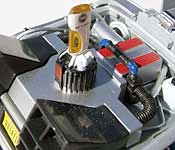 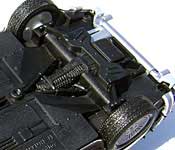 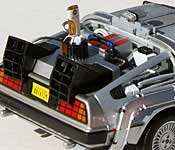 FuRyu's BTTF2 box is identical to the BTTF1 version except the background has been changed from a blue science-fiction design to a black field with stars and the photos and digital text have been updated to reflect the "part 2" car. Mr. Fusion is packed separately in a plastic baggie taped to the underside of the inner tray.

The only casting change between the "Part 1" car and this is that the reactor chamber has been replaced with a Mr. Fusion unit. The main part of Mr. Fusion and the base that replaces the reactor chamber are both painted well, but there is a great deal of slop on the part between the two. The silver body paint is slightly darker on this version, but it looks like it may be a variation in the paint rather than a conscious change.

The lightning hook has been replaced with a removable Mr. Fusion. It is removable, but the DeLorean easily fits back in its box with the unit in place, so there's no need to do so.

Mr. Fusion is a bit too tall and thin, and the logo has been enlarged for legibility. For some reason it still sports the "OUTATIME" license plate, despite having switched to the reflective bar code plate at the end of the first movie.

Very much the weakest of the four Welly Deloreans. The Mr. Fusion unit is the only thing to differentiate it from the "Part 1" car, and thanks to the incorrect proportions and poor paint it's not really a plus. The slightly darker body paint is an improvement, but not by much. Unless you're getting the full set, this is the one to skip.