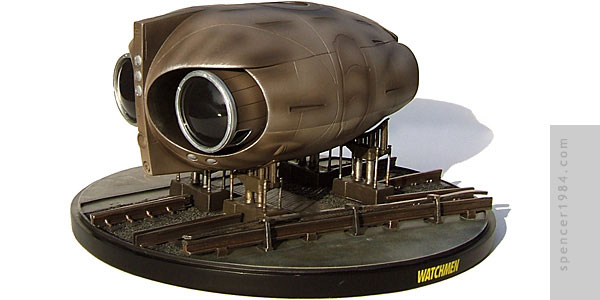 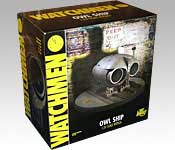 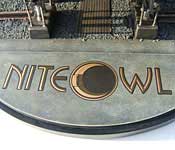 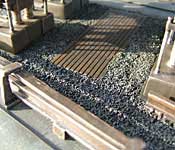 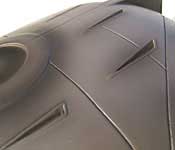 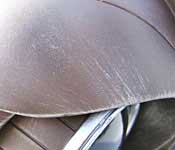 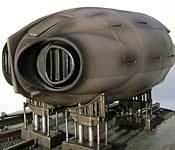 The Owl Ship is packaged in a large cardboard box featuring a photo of the statue on the on the front panel, set against a generic "underground" backdrop that evokes the subway/hangar seen in the film. The Watchmen title (complete with the clock face) is written in yellow on a black band along the left edge of the front panel. "Limited Edition," "Owl Ship/1:24 scale replica," and the DC Direct logo are all printed near the bottom of the front panel. The movie logo and different photos of the statue appear on both sides of the box, while the top repeats the Watchmen logo, "Owl Ship," and "1/24 scale replica" on a plain black background The rear panel is filled with co-sells for the rest of the DCD Watchmen line, including statues, figures, and prop replicas. A styrofoam core fits nicely inside the box (tight enough that it touches the six inner walls, but not so tight that you can't slide it out easily), and consists of three layers: the bottom layer has a tray for the bottom of the base, the middle layer has a tray on one side for the top of the base and a tray on the other side for the bottom of the ship, and the top layer has a tray for the top of the ship and Nite Owl's logo embossed on top. The net result is that Archie and the base are oriented properly to each other, but each one is completely surrounded by styrofoam. The layers are taped together, and each main component is placed in a plastic bag. The base also has a piece of cardboard wrapped around both ends of the third rail. There is also a certificate of authenticity from DC and a one-page instruction sheet telling you to remove the aforementioned cardboard from the third rail. The COA has a hand-written number matching the number written on the underside of the base.

Since the ship is removable from the base, I will cover the base in the next section. Archie feels like he's made from a single piece of cold-cast porcelain, more akin to a statue than a diecast car, model, or action figure. If it is a single piece, DCD did a great job getting the appropriate depth around some of the "sunken" areas, like the recesses between the main windows and eyebrows. It's possible that these are separate pieces glued to the main body, but if that's the case then their parts breakdown and assembly still deserve credit. The various vents, outlets, and panels scattered across the hull look good, if not as sharp as the nose. The elevation and main thrusters are the weakest of these, but given their relatively hidden positions they aren't too obtrusive. The paint is competent, with some nice airbrushed effects, clean break lines between the colors when necessary, and deep gloss black windows that look like one-way glass. There is a hint of orange peel in the windows if you catch them at the right angle, and the paint wear along the leading edges of the eyebrows seems a bit heavy, but like the thrusters they don't detract too much.

The main accessory is the 12" (30.5cm) diameter base, detailed to look like the former subway tunnel that serves as part of Nite Owl's lair. The sculpting here is fantastic, with excellent detailing on the rails, gravel floor, and dock. Even the smooth areas outside of the rails look like poured cement rather than just blank base. And if the paintwork on the ship was competent, the base is outstanding. Various washes and airbrushing have been used to give greater depth to the gravel and highlight the older "used metal" look of the rails. Nite Owl's logo is painted on one of the cement platforms, and is the only thing that looks out of scale. The dock pins are arranged so that Archie only fits one way, with the side hatch towards the third rail. Don't try to force it on the other way, as you could potentially damage the ship. The replica-specific information (including a handwritten "Number ### of 500") is printed on the underside of the base, and "Watchmen" is printed in the movie's logo font along the edge of the base on each side. Despite what some early promotional pieces said, there is no visible interior nor is there a working light feature.

DC Direct claims to have based this statue on the plans for the movie prop, and I see nothing here to indicate otherwise. Archie seems to be a fantastic match to his screen counterpart in both size and detailing, and the base just accentuates the positives.

The biggest drawback here is the price. It was originally listed for $325, which is a bit high even for a limited edition piece. However, several retailers have marked it down as much as two thirds off (as of Q3 2009), which makes it a whole lot more attractive. The lack of an interior is unfortunate, but appears to be based on a marketing goof rather than an eliminated feature (the original prototype had no interior, either). If you are a fan of Watchmen, it's definitely worth getting one of these - but don't pay the full MSRP for it.