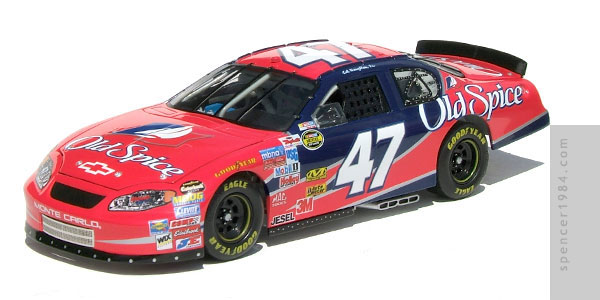 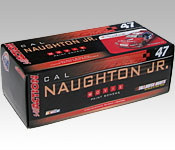 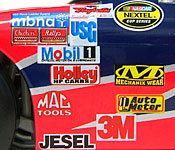 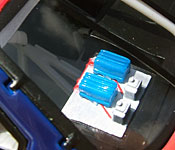 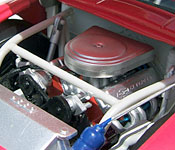 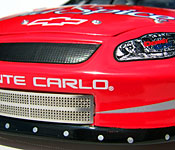 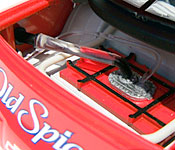 Talladega Nights: The Ballad of Ricky Bobby was the second film in Will Ferrell's Mediocre American Man Trilogy (after Anchorman: The Legend of Ron Burgundy). Ricky Bobby's best friend and wingman on the track was Cal Naughton Jr., who drove this Old Spice-sponsored #47 Monte Carlo.

Action Collectibles uses shoebox packaging with a lift-off shell and a two part foam tray. The box is very dramatic, with the Action logo, "Cal Naughton Jr.," "Movie Paint Scheme," car number, and movie title on the front, back, and top panels. The front and back panels also include the "Officially Licensed NASCAR" logo and Action Collectibles tagline. The box top has a retouched photo of the model, "Cal Naughton Jr." signature, and "1:24-Scale Stock Car Limited Edition Adult Collectible." The graphics are color-keyed to match the car inside, which is a very nice touch. One end panel has the two-digit year the replica was issued (06), Action "A" logo and website, barcode, and a silver sticker that includes the driver name, car number, sponsor, car type, edition size (1500), and part number. The other end panel is much simpler, with only the Action and Action "A" logos and copyright information. The bottom of the box has a standard boilerplate that covers all of the cars offered by Motorsports Authentics/Action.

As with the Wonder Bread racer, the Old Spice car used the contemporary Monte Carlo. The only difference between the cars is the exterior paint job. The Old Spice sponsorship is a much simpler design, with a pair of dark blue "swooshs" against a red body. The fit & finish are still top-notch, and the paint ends up on par with the Wonder bread car: it lacks the paint slop on the #26's engine, but it has a couple of minor rough spots on the rocker skirts and roof rails. They're difficult to see without closely examining the car, though, so it's nothing that really detracts from the overall appeal.

Because it uses the newer Monte Carlo, Cal's Old Spice car is as good as (and without the engine paint error, arguably better than) Ricky Bobby's Wonder Bread car. It's lower production run may also make it somewhat more attractive to collectors. But your mileage may vary: 1500 isn't a terribly short run, and Cal's status as a second-tier character makes it less critical unless you're looking to get the full set of Talladega Nights cars or are a big John C. Reilly fan. As I wanted to get the full "Shake & Bake," it was an easy choice for me. Recommended.