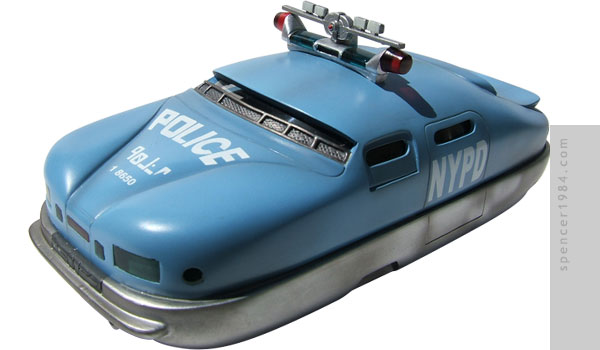 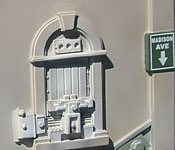 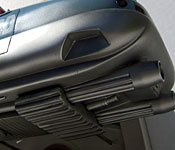 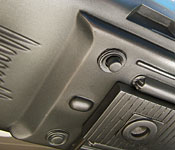 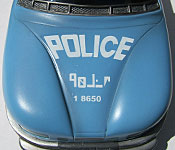 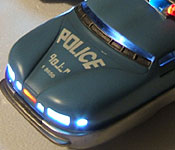 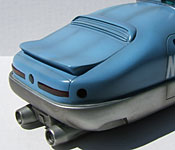 As Leeloo (Milla Jovovich) makes her escape from the authorities in The Fifth Element, she lands in the back of a Police Car driven by Korben Dallas (Bruce Willis). Dallas proceeds to use his military training to outmaneuver the heavily armed NYPD and eventually escape with Leeloo. Writer/director Luc Besson had decided to make Dallas a cab driver after reading Jean-Claude Mézières' The Circles of Power (which featured a flying hack driver named S'Traks on the planet Rubanis), though some fans have also noted similarities between Dallas and the titular character of the 1981 Heavy Metal story "Harry Canyon" (artist/production designer Jean Giraud, aka Mœbius, worked on both The Fifth Element and Heavy Metal).

The Police Car is hollow cold-cast resin. The basic shape is very simple (fitting the utilitarian nature of an official vehicle), but it has enough lines, panels, and other details to keep it from being boring. The rear doors are full-sized and flush mounted, but the forward hatches are recessed and much smaller to keep the occupants safe. The screen over the windshield is finely textured, and while a photoetched piece would be nice this is still well done. The only thing that looks a little soft is the light bar, but even that is pretty good. The chassis has a combination of cast-in and separate added pieces to make it look high tech, and the bottom center of the chassis is a removable piece to act as both a battery cover and the mount for the "flying" feature. When displayed by itself, the cover magnetically snaps into place. When displayed as part of the diorama, the car snaps into a similar piece that is permanently mounted to the wall. It's a very clever way to make the car look great by itself and be secure as part of the diorama. The Fifth Element was made before the NYPD switched to their current white with blue graphics color scheme, and so the top half of this car is light blue with white markings. The bottom half is metalized silver, and the car is given a very light overall weathering to make it look used. The weathering is expertly applied with subtle fades and a very good use of color. While this has a full interior, the windows are extremely narrow and the rear window is closed louvers, so it is very difficult to see any detail It's still a very cool touch.

A push-button switch on the chassis (cast to look like a matching greeble on the other side of the car) activates the light-up feature. The roof, interior, headlights, markers, and tail lights all glow brightly. The panel in the center of the chassis can also be removed to create a mounting point to attach the car to the diorama. The diorama is a section of wall with windows (two of them are shuttered, and the third is blocked by a futuristic air conditioner), vents, braces, a "One Way" (down) street sign, and a green "Madison Ave" (also down) sign. Like the car, there is an expert weathering on everything to make it look "used" without going as far as "dirty." The Police Car fits near the lower right corner of the wall. Near the center bottom of the wall is a name plate with the item number and edition size. The base of the diorama has the symbols for the four elements spaced across it. The overall piece is 15.5" (39.4 cm) x 11" (27.9 cm).