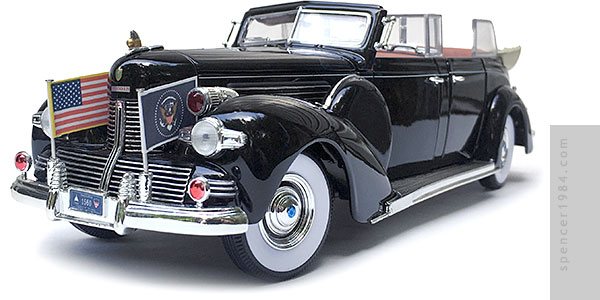 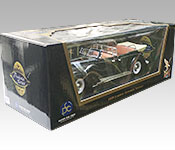 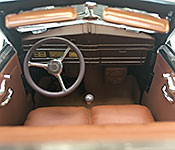 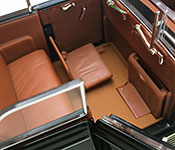 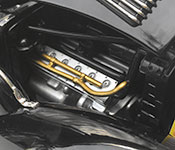 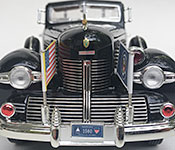 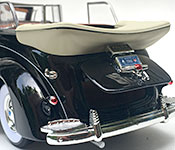 Within a few weeks after the December 7, 1941, attack on Pearl Harbor, the White House Garage delivered the 1939 Lincoln K series limousine to Ford Motor Company’s plant in Alexandria, Virginia, on the waterfront across the Potomac River from Washington D.C. The car was shipped to the Lincoln plant on West Warren Avenue in Detroit and, upon its arrival, Lincoln workers began to disassemble the limousine, readying its wartime armor and additional modifications requested by the Secret Service. Workers removed the Brunn body and altered the car’s chassis. Its suspension was beefed up with heavy-duty shock absorbers and additional leaves in the springs – to handle the added weight of armor plating and thick bullet-resistant glass. Likewise, a modified windshield frame was installed to accommodate the thicker windshield glass. When the Brunn body was reinstalled, it received a new 1942 model H series Lincoln front end clip (fenders, grill, and front nose cap piece), which gave the car a crisp, more modern look.

Lucky Die Cast went with a much more traditional package than Yat Ming for their Presidential Series. It's a fairly basic black window box measuring 14" (355mm) x 5¼" (135mm) x 6" (150mm). The window has an angled geometric edge outlined in gold and surrounded by the "Presidential Series" logo and scale on top and Lucky Die Cast and Road Signature logos on the front. A sticker identifying the car is placed between the logos under the window on the front. Each end flap has the Presidential Series logo, one with a black background and the Lucky Die Cast logo, the other with a gold background and URL. The back panel has all of the requisite legal info in multiple languages, while the bottom is solid black. Inside, a printed backdrop has a photo of the White House and its grounds. A blister holding the two bumper flags is on the backdrop ahead of the car and the Presidential Series logo is behind it. The car itself is held to a plastic tray by two screws, with plastic bands holding the doors and hood closed and a sticky circle holding the trunk closed. It's a decent enough package, but compared to the red faux velvet and vertical presence of the previous release, it seems a little lacking.

The broad strokes are identical to the Cadillac: heavy die cast metal body painted a nice gloss black with myriad chrome plastic details. There are a few more paint apps this time, including the outermost grille bars, a black wash on the main grille and running boards, the front bumper lights, taillights, and a thin white pinstripe running the entire length of the car. The badges on the nose are printed, and while they are sharply detailed they are applied just left of center. Clear plastic is used for the lights, windshield, divider, and side windows. The fender light has a clear red lens, and the convertible top boot is painted a light tan. The windshield has a printed chrome frame and wipers. The two flags are printed material mounted to metal poles that fit into holes on the front bumper. Stickers are used for the license plates (a blue & white "Inaugural" #1560) and the black & gold "Police/Do Not Pass" sign.

Under the hood is Lincoln's 414 L-head V12 engine. It's a decent enough representation, with separate wire looms and detailed cylinder heads complete with bolts and spark plugs, but is let down somewhat by the giant screw head holding the two halves of the block together. It's a shame they couldn't find a better way to hide it, because details like the correctly captured exhaust header and separate intake manifold with carburetor and unique air cleaner are worth close examination. Similarly, the chassis is well done with separate leaf springs at all four corners and a separate painted exhaust pipe. The tires are hard vinyl with whitewall inserts over chrome caps with painted rings and centers.

The interior is primarily cast in a medium brown plastic with chrome hardware and clear door toppers with painted black edges to represent the rolled-down armored glass. One of the middle window brackets was broken on mine right out of the box, and while unfortunate it doesn't affect anything functional. The dashboard, steering wheel rim, and horn button are painted a slightly darker brown, and the dashboard has painted trim and printed gauge faces. Under the right side of the dash is a color-matching heater, the pedals are black, and the shift lever is chrome with a dark brown knob. The floor (including the trunk liner) is flocked in a brown just slightly lighter than the rest of the interior.

All four doors, the hood, and the trunk open and close smoothly. The hinges are very nicely done, from the true piano hinge along the center of the 4-piece hood to the spring hinges in the doors that almost completely negate any intrusion into the cabin. Steering is functional and tied to the steering wheel. Two jump seats can be unfolded from the floor and cowl just ahead of the rear seat. Each of the two flags mentioned above can be inserted into either of the holes in the front bumper, though all the photos I've seen have the American flag on the right and the Presidential flag on the left.

This is generally a great replica of the Sunshine Special's post-upgrade look. The details have been captured nicely, and things like the door and hood hinges show a fantastic attention to detail. The only part of the whole thing I find lacking are the flags. They're not quite as good as what we saw on the Cadillac, with asymmetrical faces and the US flag being an incorrect 50-star design. Scaling is a near-perfect 1/24.

The Sunshine Special was the first Presidential limo to feature many of the characteristics we see on State cars today, such as an armor-plated body, bulletproof glass, and run-flat tires. With its place in history is well established, it's nice to see such a well-done replica of the car. My only caveat would be to consider getting one sold under the Yat Ming banner, where the flags and premium packaging give it that little extra "wow" factor.