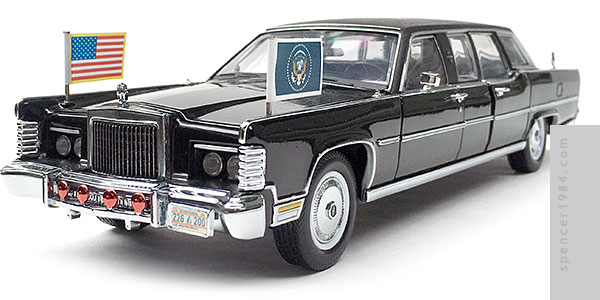 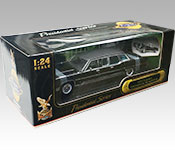 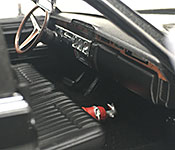 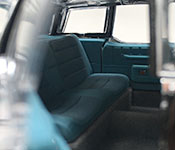 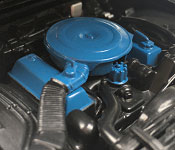 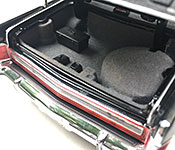 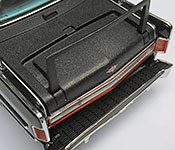 At the time, this car was the biggest, most thoroughly armored presidential car ever made. In addition to bulletproof body panels and windows, the car was equipped with puncture-proof tires, high-tech communication and security systems, and a foam bladder in the fuel tank to prevent explosions in case it was ever punctured by a bullet. The rear bumper folds down to create a step where Secret Service agents can stand while hanging onto a special handle that pops up out of the trunk lid. Powered by a custom-built 214 hp OHV 460-cubic-in V-8 engine, this massive car weighs 10,000 pounds. During the Reagan administration, the front end of the car was updated to 1979 specifications.Although best-known today as the "Reagan Car," this 1972 Lincoln was also used by Presidents Nixon, Ford, and Carter before being retired from government service.

The packaging for this limo is identical to the 1961 Lincoln, save for the sticker on the front of the box identifying the car.

Despite this being the first presidential limo to start off as a fixed-roof sedan, the general breakdown here is the same as it was for the earlier convertibles: metal body painted a nice gloss and accented with chrome-plated plastic trim pieces. Silver paint is used to finish the trim in a few places, including the headlight bezels, eyebrows, grille wings, and fender arches. Black paint is used to define the grille bars and give the bumpers their rubber strips, while transparent red paint is used over chrome for the emergency flashers and taillights. As with the Quick Fix car, the roof is textured chrome plastic with the panels painted black to create the vinyl finish. The trunk lid is a similar textured black plastic, the first time in this series where a primary body panel is plastic rather than diecast. The result is a seamless transition from the roof to the rear deck, and the folding handle fits perfectly, so it was a smart choice. The rear badge is a printed element, and the license plates are bicentennial D.C. "226-200" stickers. The two flags are printed material mounted to metal poles that fit into holes on the front fenders.

The Lincoln's big V8 represents the first of the "emissions era" engines, and unlike previous cars in this series it has the typical horizontally split design: a top half with the valve covers, air cleaner, hoses, etc. cast in, and a bottom half with the oil pan, transmission, belt assembly, etc. The result is a passable but far less impressive appearance when compared to the earlier full-engine cars. The chassis has the usual separate driveshaft, rear axle/suspension, and single exhaust pipe. The tires are hard vinyl with whitewall inserts and chrome caps.

The driver's area is is black plastic with chrome and woodgrain accents and a black flocked floor. It's nicely detailed with a fully printed dash face, sharp door controls, and a separate fire extinguisher in the passengers' footwell. The rear is both lighter and more colorful, with medium blue seats, door panels, and rear dash, chrome accents, and a gray flocked floor. The truck is also flocked in gray, with several black plastic accessories.

All four doors, the hood, and the trunk open and close. The doors can be a little tricky to open thanks to the flush fit and closed windows, and the hood hinges aren't quite stiff enough to hold it open. The trunk has a large fold-out handle and the rear bumper can be lowered to provide a step for Secret Service agents to ride on the back of the car. Steering is functional and tied to the steering wheel. Each of the two flags mentioned above can be inserted into either of the holes in the front fenders, though all the photos I've seen have the American flag on the right and the Presidential flag on the left.

This is a good representation of the current look of the car, with all the modifications it received during its tenure like the updated front end and the center high-mount brake light. The only omission seems to be that it is missing the Presidential Seal on the rear doors. Scaling is a near-perfect 1/24.

This car represents many major paradigm shifts: the last of the Presidential Lincolns, the first fully armored sedan, and it rode the transition from the pre-embargo US auto industry to the post-import era of the 1980s. The replica isn't quite as good as some others in the series, mostly thanks to the new engine design, but it still features a number of nice touches and fun details.