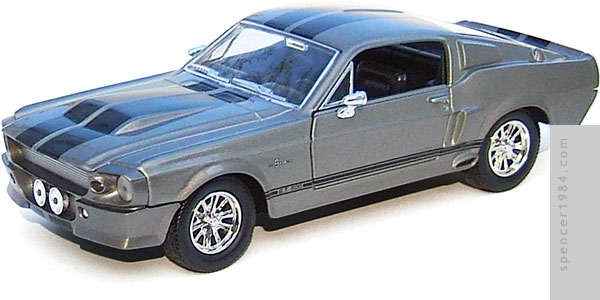 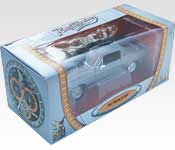 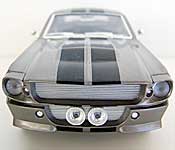 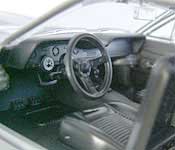 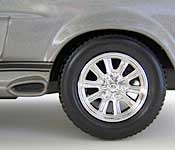 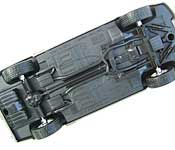 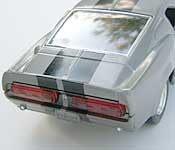 NOTE: This casting was reissued by GreenLight Collectibles in officially licensed Gone in 60 Seconds packaging. The finished model was unchanged from its original release reviewed here.

Eleanor is part of the "Road Signature" series, which comes in a silver metal-colored window box with orange trim. The front, top, and rear panels have an oblong globe design with a brushed metal background and a graduated orange line around the edge. This outlines the edges of the window, and curves in at the bottom of the front panel to focus on the model name. The series logo, scale, and age restriction are also on the front of the box. A different version of the age restriction and series logo are on the top of the box. The back of the box has the various Yat Ming marketing info, and the bottom of the box has the licensing information. These boxes are not individualized to the specific car inside, so the model name on the front pannel and the bar code are stickers. The inside of the box is solid orange, and the car is captured in a folded plastic tray and held down with two twist-ties.

The body is diecast metal with plastic front & rear fascias. The overall body looks pretty good, though some of the details around the scoops and the fuel fill look soft. The left side of the front fascia also has a rounded corner where it meets the fender opening. Otherwise, the casting looks good with clean panel lines and sharp edges. The plastic fascias are especially well done, with nice detailing around the auxillary lights. The headlights and lower driving lights are clear plastic (the headlights aren't installed straight), the taillights are transparent red, and the windows are clear with printed chrome trim. Chrome is also used for the sideview mirrors, wheels, and driving light buckets. The grilles and other auxillary lights are silver and the exhaust ports are black. The primary stripes are generally nice & clean, and are especially well done around the rear fascia. They are not printed across the horizontal part of the grille surround, which loses a little bit, but it doesn't detract from the overall look. The rocker stripes, shelby logos, and rear plate are also done nicely. The interior is simple but well done, with detailed seats, dash, pedals, and side panels. It is cast entirely in black plastic with printed gauges. The chassis is also simple but passable. A few details have been omitted like the starter and parts of the exhaust system, but they only stand out because the rest of the chassis is so well done.

Although much of this casting has been simplified, it matches the prototype very well. As noted above, the front fascia is especially well done. Other modifications include the new hood, custom side scoops, side pipes, fuel fill, rear fascia, and wheels. These are all OK as-is, but would really look great with a few more paint applications. Scaling is a dead-on 1/24, right down to the 17" wheels.

Several quasi-Eleanors have been released in 1/24 over the years, but this is the first time we've seen one done to match the actual movie cars. Although I'd personally still like to see a high-end Eleanor replica, I have to commend Yat Ming for finally giving collectors a decent replica at an affordable price. If you're a fan of Gone in 60 Seconds/Eleanor and have been looking for a 1/24 replica, this is a no-brainer. Recommended.