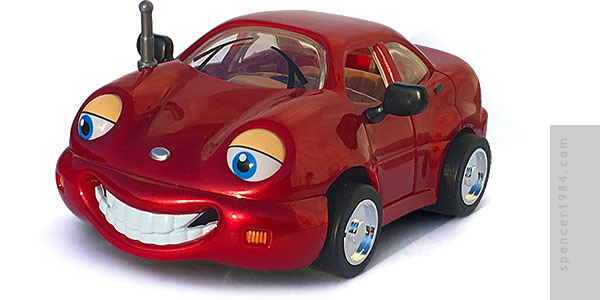 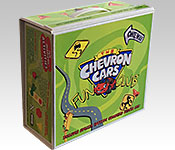 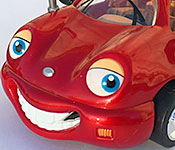 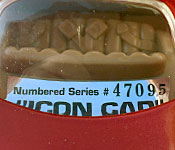 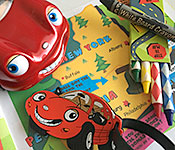 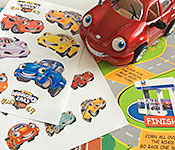 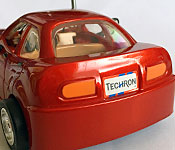 Despite having nearly two dozen characters released in the first 3+ years of the Chevron Car series, none of them really matched the red sedan that had been part of the logo since the very beginning. That changed with the release of the Chevron Fun Club kit, a toolbox designed for road trips with games, activities, and a uniquely numbered "Icon Car." Released on December 31, 1999, this became the final Chevron Car to roll out in the 1990s.

The Chevron Cars Fun Club kit has a unique package in the Chevron series. It's a vinyl-covered box approximately 8¾" (220mm) x 8¼" (210mm) x 3¾" (95mm) with brightly colored graphics on all six sides. The main/front panel has the Chevron Cars logo centered on a swirly two-tone green background, with "Fun Club" flanking the car in the logo. A bendy road goes up the left side, while various signs, a traffic cone, and a signal light float near the edges. "Includes Special Edition Numbered Series Car!" is written across the bottom of the panel in red. The top has a plastic carrying handle and a hook-and-loop fastener to keep the main panel closed. It too has the logo, swirly background, and floating cones, plus a call to visit the Chevron web site. The two side panels have "Fun Travel Games" and "Fun Travel Activities," including I Spy, Alphabet Race, What's on the Plate, Tic-Tac-Toe, Ready Set Scribble, and Can You Guess the Street Signs (with the stop sign erroneously represented by a hexagon). The back panel is mostly a large white panel to act as a drawing surface for the games. Inside, a divider provides space for two cars (only one is included) and a third narrow space for the included crayons, luggage tag, and spinner piece. A bag that sits on top of the divider holds the Fun Stuff Catalog, game board, Go Anywhere Fun Book, game pieces, and temporary tattoos - more about all these under "Features/Accessories."

Icon Car shares most of his casting with Sam Sedan. The only changes here are the front bumper, which now has recessed parking lamps and a wider smile; the sideview mirrors, which now have upturned outer edges; and the wheels, which are now low-profile slicks over chrome Smoothies. The paint apps are quite a bit different, too: for the first time, a Chevron Car is fully painted. The deep metallic red looks great, with a nice even finish and few scuffs even after nearly two decades. He also has a silver hood ornament, black door handles, orange parking and tail lights, and blue eyes with peach eyelids. The antenna is now silvery gray, the interior is a dark tan color, and behind the back seat is a chrome sticker with "Numbered Series/'Icon Car'" and the car number printed in black (I have car #47,095). The chassis is the usual name and series logo plate, with the designation "Numbered Series" in place of the usual number.

Being based on his casting, Icon Car has the same features as Sam: moving eyes and opening doors. Both work as they did before, with no sign of mold degradation. The bulk of the "accessories" are part of the Fun Club kit.

There are five crayons: a box of four (red, blue, green, and yellow) and a much larger black. The luggage tag is a rubbery black loop attached to a 3¼" (80mm) portrait of the Icon Car as he appears in the Chevron logo.

The Fun Stuff Catalog is a much-expanded version of the catalogs that came with the regular series, featuring apparel, art prints, mugs, golf accessories, the toys, and other tchotchkes. Prices and availability are noted to only be good through June 2000.

The Fun Town Game is a simple folded high-gloss board, a spinner, and a sheet of stickers to act as game tokens. It's a simple race game, essentially a simplified version of Life, with players spinning to advance (or retreat) on the road and various pitfalls along the way. The game pieces are drawings of Rudy Ragtop, Freddy 4-Wheeler, Leslie LX, Tina Turbo, Patty Patrol, Wendy Wagon, Pete Pick-Up, Kelly Kompact, Tony Turbo, Holly Hatchback, Woody Wagon, and Tyler Taxi. The same drawings of Tyler, Tony, Tina, Sam, Pete, and Holly are also included as temporary tattoos, to be applied with water and removed by washing with soap or rubbing alcohol.

Lastly, the Go Anywhere Fun Book is a 38-page activity book that takes a brief tour of the United States. After a wide view of the country and introduction, each page spread features a map of at least one state highlighting the local cities, state facts, jokes/riddles, and miscellaneous activities like coloring pages, connect-the-dots, mazes, word searches, etc.

Sam Sedan is a good choice to base the Icon Car on, with most of the details as close to the original drawing as any car is to their commercial counterpart. The new front bumper helps sell the look with the more enthusiastic grin and unique parking lights. While the chrome wheels and metallic paint are a little fancier than what you'd expect, they do help make this stand out as a "premium" Car. The new bumper and wheels don't alter the overall size of the car much, and he still measures approximately 5½" (140mm) long, 3¾" (95mm) wide, and 2¼" (60mm) tall.

Not a good choice for MIB collectors thanks to the solid packaging making display impossible, but the Icon Car is a good addition to the lineup for anyone planning to take these out of their packages.